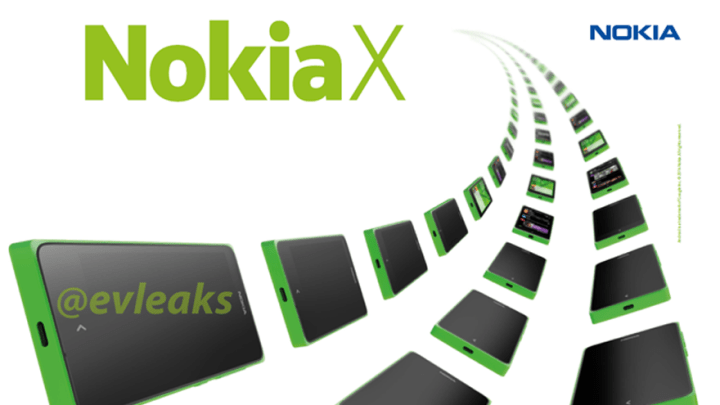 The smartphone market would be a very different place if Nokia had made the switch from Symbian and Meego to Android instead of Windows Phone. We’ll never know if the Finnish vendor would have fared any better or if CEO Elop was right to be scared off by Samsung. What we do know is that the company didn’t do very well with Windows Phone and as of April, it will no longer be a smartphone maker. Before consumers part ways with Nokia, however, the vendor plans to make waves (at least) one last time by unveiling an Android smartphone next week at the annual Mobile World Congress trade show in Barcelona, Spain.

An image of the Nokia X, code-named Normandy, has popped up yet again from well-known gadget leaker @evleaks, this time in green. Nothing new can be gleaned from the image, though the fact that even more marketing renders are leaking is further evidence that the Android phone will indeed launch despite earlier reports to the contrary.

According to recent leaks, Nokia X specs include a 4-inch WVGA display, 1 GHz dual-core Snapdragon processor, 512MB of RAM, 4GB of internal storage, 5-megapixel camera and 1,500 mAh battery. More importantly, it looks like the phone will cost about $100 when it launches in the coming weeks.