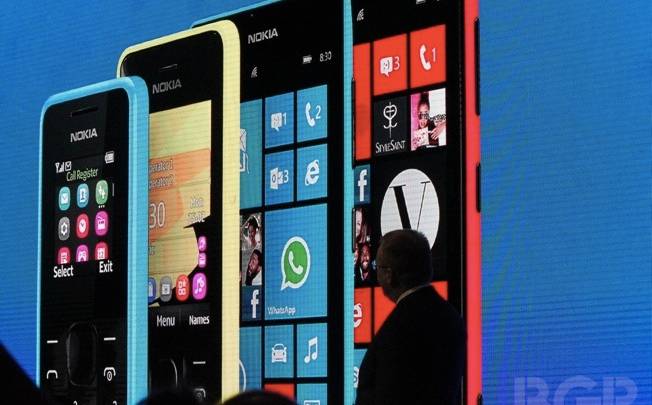 Nokia (NOK) decided to eschew the high-end smartphone market at Mobile World Congress this week to focus on a line of lower-cost phones aimed at defending its turf in emerging markets from the likes of Samsung (005930) and its REX feature phone series. The Finnish phone manufacturer on Monday announced four new phones: The Nokia Lumia 720 and 520 smartphones and the Nokia 301 and 105 feature phones. The Lumia 720 is the most high-end of all the devices with a 4.3-inch touch display with a resolution of  800 x 480 pixels, a dual-core 1GHz Snapdragon processor and a 6.7-megapixel camera. The device is priced at $329 before carrier subsidies and will begin launching in Asia during the first quarter of 2013 before expanding to Europe in the second quarter.

The Lumia 520, meanwhile, will cost even less at around $183 without carrier subsidies and is slated to launch in the United States exclusively on T-Mobile in the second quarter. The device features a 4-inch touch display with a resolution of 800 x 480 pixels, a dual-core 1GHz processor and a 5 megapixel camera. During its Monday press event at Mobile World Congress, Nokia representatives singled out the 520 for having a “pillowy design” and for being the world’s “most affordable Windows 8 smartphone.”

Nokia’s full press release for the new devices is posted below.

“The momentum behind Nokia is gathering pace. The launches today reflect our commitment to broadening our devices and services portfolio to meet the demands of people and businesses around the globe,” said Stephen Elop, President and Chief Executive Officer of Nokia.

“By offering better experiences at a more affordable price we are reinventing the battle for affordable mobile devices, and Nokia has the building blocks to win.”

The Nokia Lumia 720 comes in five colors, with an estimated starting price of EUR 249 before taxes and subsidies. Rollout is planned to start in Hong Kong, Vietnam and Singapore in Q1 2013, before continuing into broader markets in Q2, including China as well as key markets in Europe, Asia, Africa and India.

The Nokia Lumia 520 is Nokia’s most affordable Windows Phone 8 smartphone, delivering experiences normally only found in high-end smartphones, such as the same digital camera lenses found on the flagship Nokia Lumia 920, Nokia Music for free music out of the box and even offline, and the HERE location suite. A four-inch super sensitive touchscreen makes for a more responsive and immersive content experience than can usually be found at this price.

The Nokia Lumia 520 comes in five colors, with an estimated starting price of EUR 139, before taxes and subsidies. Roll-out is planned to begin in Q1 2013 in Hong Kong and Vietnam, before expanding broadly in Q2 to markets in Europe, Asia – including China and India – Latin America and Africa. The Nokia Lumia 520 is also planned to roll out in the United States with T-Mobile.

Nokia also unveiled the Nokia 105, its most affordable phone to date, and the Nokia 301, for more affordable Internet and email access, and camera experiences inspired by Nokia Lumia smartphones.

The Nokia 105 is the ideal device for the first-time phone buyer, featuring a bright color screen with clear menus and essentials like FM radio; multiple alarm clocks; speaking clock; a dust and splash-proof, pillowed key pad; and a flashlight. Its durability and up to 35-day battery life also make it ideal for people seeking a back-up device.

The Nokia 105 is available in black and cyan for a recommended price of EUR 15. It is planned to start rolling out in Q1 2013  and is expected to be gradually expanded to in China, Egypt, India, Indonesia, Nigeria, Russia, Vietnam and other markets in Africa, Middle East, Asia-Pacific and Europe.

The colorful Nokia 301 delivers elegant design and a bold color palette, with a fast, 3.5G Internet connection and Nokia Xpress Browser preloaded for up to 90 percent more data efficiency. It is the most affordable Nokia device to offer video streaming and also comes with new smart camera features, inspired by the digital camera lenses on the Nokia Lumia smartphones.

The Nokia 301 is available in cyan, black, magenta, yellow and white for a recommended price of EUR 65. It is planned to start rolling out in Q2 2013 and is expected to be available in more than 120 countries in Africa, Asia-Pacific, Europe, India, Middle East and Latin America.