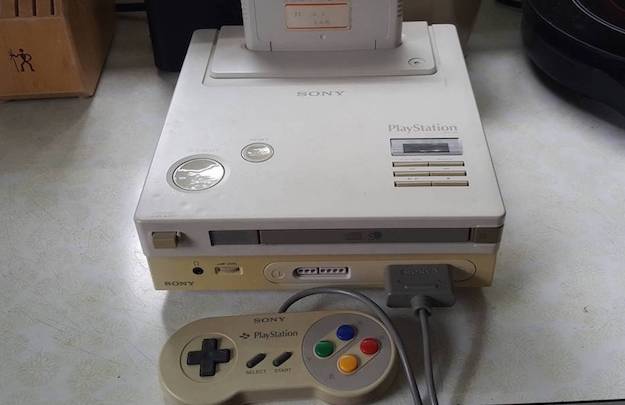 In what is likely one the most obscure and fascinating stories in video game history, Sony back in 1988 signed off on a deal whereby it would provide Nintendo with CD-ROM drives for the SNES. The thinking at the time was that the SNES, in addition to being able to play standard cartridges, would also be able to run disc-based games via Sony’s CD-ROM technology.

Ultimately, a contract dispute over money and various licensing issues killed the partnership, but not before 200 prototype units of the hybrid device, dubbed the “PlayStation” or “Super Disc”, were manufactured. This past July, a Reddit user posted a rare photo of the device after discovering it in his dad’s possession. Naturally, many commenters were quick to call it a fake.

Now, just a few months later, we have solid proof that the unit is not only 100% real, but is still operational. Recently, Engadget caught up with the aforementioned father-son team (Terry and Dan Diebold) at a retro gaming expo in Hong Kong where they managed to secure a power supply for the console, turn it on, and even play a few games on it. Though they were able to play SNES games, the CD-ROM drive wasn’t working properly.

As for how Terry Diebold managed to find himself in possession of such a rarity, he told Engadget that he happened to win it at an auction when the company he worked for filed for bankruptcy. As the story goes, Diebold worked for a banking company called Advanta Corporation. Notably, one of the company’s board members at the time was Olaf Olaffson, the founder, president and former CEO of Sony Interactive Entertainment.

“Well they closed his office up in New York and shipped everything down to our storage room, fortunately,” Terry explained. “So this came in with his personal stuff. This probably sat in the warehouse for a few years prior to that.”

Following the auction, the console sat untouched in the family attic for a few years until Dan Diebold stumbled across a Reddit thread referencing the short-lived Nintendo/Sony partnership. And that’s when Dan uploaded a photo of the console online. And the rest, as they say, is history.

There’s a whole lot more to the story that’s worth checking out. Make sure to hit the source link below and head on over to Engadget to enjoy a fascinating, informative, and wide-ranging interview with the Diebold’s. After all, it’s not too often that an obscure piece of video game lore (or perhaps mythology is more appropriate) comes back from the dead decades later.

A closer view of the console can be seen below.