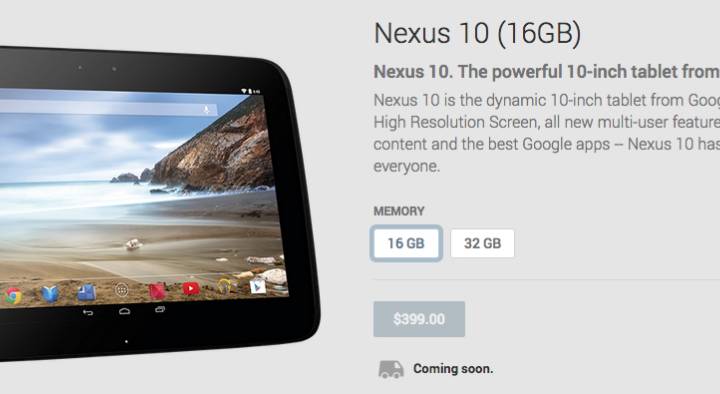 Even though both the 16GB and 32GB versions of the Google Nexus 10 tablet were listed as out of stock for a few months now, the 10-inch Samsung tablet will apparently return to the Play Store at some point in the future — Google changed the label on its Play Store page from “out of inventory” to “coming soon.”

The device was launched in late 2012, and Google did not release a successor last year, despite what many rumors claimed. It’s not clear whether the company will soon unveil a new Nexus 10 model, or whether it will simply start selling the old model again. In similar fashion, Apple has just relaunched a slightly updated iPad 4, although the company did it to replace the iPad 2.

As for Samsung, the company has just launched a new line of Galaxy Tab models, with the company also cooking up a new family of tablets that will reportedly pack high-resolution AMOLED displays – FCC listings for these devices have already been spotted. At one point, the company was rumored to make for Google a new Nexus 10 tablet that would offer an AMOLED screen.

Other rumors suggested that HTC will make a high-end Nexus tablet this year. However, some reports speculated that the company may build a 8.9-inch device for Google, not a 10-inch tablet.