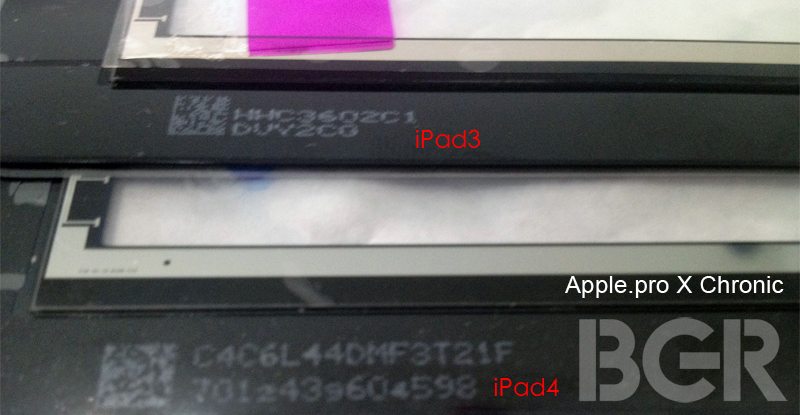 We were able to share some of the first photos of Apple’s upcoming iPad 4 a couple days ago, and this time we have been sent photos of a new iPad’s display assembly. The most noticeable changes we can see are the fact that the front-facing camera cutout is larger than the previous model, allowing Apple to include a bigger sensor. We’d bet that Apple will continue the 1.2 megapixel FaceTime HD camera from the iPhone 5 and iPod touch here. One more change that will be most welcome is the fact that the screen will be optically bonded to the screen, reducing glare and improving the picture. This time around, we have not be clearly told whether this part is from Apple’s 3rd-generation iPad refresh that will mostly be announced tomorrow, or for another iPad model set to be launched at a later date. We’d assume it is the refreshed 3rd-generation model. If so, that would be a new Lightning dock connector, upgraded FaceTime HD front facing camera, optically bonded display, most likely improved 4G LTE support across the globe, and possibly a faster processor. We will find out very shortly. Thanks to Apple Museum Taiwan and Chronic.