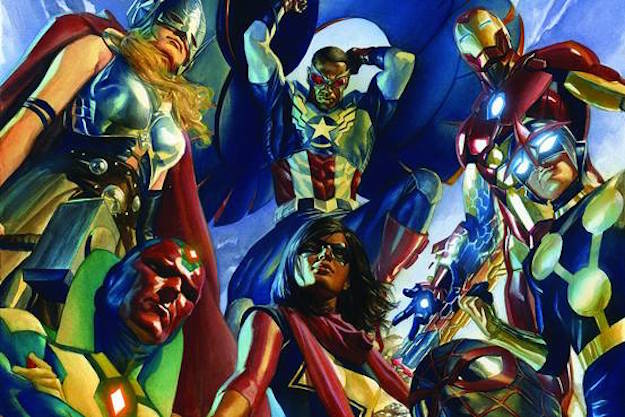 Providing you haven’t been living under a rock for the past five years, you’re probably aware of The Avengers. Earth’s Mightiest Heroes have been a dominant force at the box office ever since Robert Downey Jr. donned the Iron Man suit in 2008, but what you might not know is that the DNA of the team has been changing drastically in the world of Marvel Comics.

READ MORE: Revealed: The Next Spider-Man

Following a massive, catastrophic summer event called Secret Wars, the Avengers that you know and love will be replaced by an “all-new, all-different” cast of characters, including a female Thor, a black Captain America and Muslim-American teen Kamala Khan as Ms. Marvel. In fact, Tony Stark is the only white guy on this version of the team.

“I like the fact that we ended up with an Avengers team with one white guy on it,” Mark Waid told The Wall Street Journal. Waid, who just came off of an incredibly successful run on Daredevil, will be writing the new Avengers series this fall.

It’s important to note that this was not a concerted effort by the team at Marvel to suddenly diversify its flagship title. Instead, these changes have been happening gradually and naturally behind the scenes for months (or years, in some cases). Most comic book readers are already accustomed to seeing Sam Wilson equipped with Captain America’s shield or Miles Morales in Spider-Man’s suit.

“We get to do something that hasn’t been done since the beginning of the series back in 1963, which is we get to tell an origin story for the Avengers as the team rebuilds from the ground up,” Waid said.

These are the character that will make up the All-New, All-Different Avengers:

According to the Journal, the main threat of the new series will be Warbringer, a villain from Nova’s universe. Waid says he’s not quite like any other alien invader we’ve ever seen.” The team also won’t be together from the moment the new comic kicks off. Everyone’s doing their own thing until something brings them all together.

Waid also notes that Avengers Tower is no longer part of the equation and that the new Avengers can’t rely on unlimited funds from Tony Stark and S.H.I.E.L.D. any more. Again, that’s something we’ll learn more about when the comic launches.

“Half the team goes to school,” explains editor Tom Brevoort. “They’ve got hours of operation, and if they get stuck in Zimbabwe, somebody’s going to have to write the absentee slips.”

It might sound like a drastic change, but when comics refuse to evolve, they quickly grow stale. Fall can’t come soon enough.