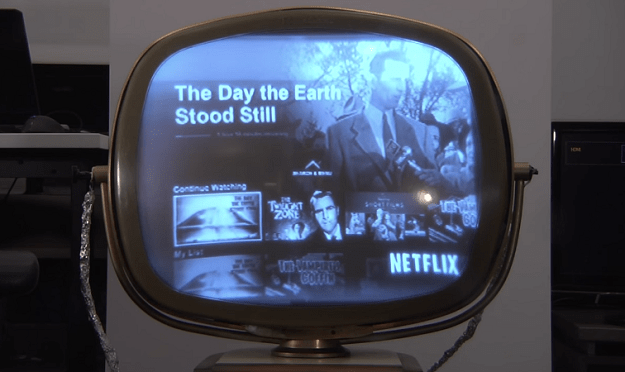 It’s always cool when big tech companies hold internal hackathons. Not only does it provide a great way for employees to have some outside-the-box fun, it can sometimes result in some rather interesting breakthroughs. Facebook, for instance, has at times implemented features that were initially brainstormed and created during company-wide hackathons.

Looking to get in on the hacking fun, a team of four Netflix engineers recently worked some of their engineering magic and managed to get a video stream up and running on an ancient Philco Predicta TV from the 1950s. While the Philco company went out of business more than 50 years ago, the original Predicta form factor, complete with a swiveling screen, has long been an iconic and recognizable design.

Now the picture quality is about as good as you’d expect (shaky black and white), but the engineers did manage to configure the set’s two knobs on the side as makeshift controls to seamlessly allow for scrolling through Netflix’s content listings.

All in all, pretty cool stuff. While it’s common for people to obsess over old record players, vintage video game systems and other random tech vestiges of the past, it’s not too often that you hear anyone wax nostalgic about old school TVs.

As a final point, Netflix is seemingly always up to something interesting and odd these days. Just a little over a month ago, for example, the company put together an actual “Netflix and Chill” button.