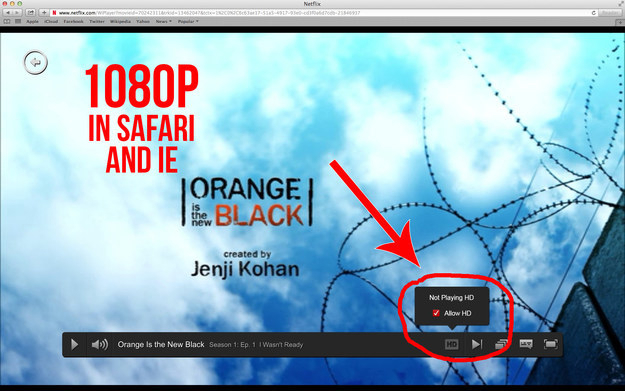 Netflix just released the third season of Orange Is the New Black, and regardless of whether you’ve already binge watched it already or not, chances are some people will be watching it the wrong way on their computers. If you use Google’s Chrome browser to stream Netflix on a Windows or Mac PC, you’re probably limiting your viewing experience to 720p (HD) rather than 1080p (Full HD).

For some reason, Netflix’s Full HD streaming isn’t available on Google Chrome no matter what TV show or movie you play.

Luckily, there’s a simple way to fix this, BuzzFeed reveals, and it’s painfully obvious: switch browsers when you watch Netflix, if Google Chrome is your default browser. Whether if you’re using your Mac or Windows computer to watch Netflix shows, the default browsers on these operating systems will support Full HD streaming.

Safari on Mac and Internet Explorer 11 both play Netflix content at up to 1080p (assuming the movie or TV series is available in 1080p), while Google Chrome limited to 720p.

In addition to changing browsers, you should also go to your Netflix account’s Playback Settings and set it to High. Finally, make sure you check “Allow HD” in the video player before getting back to your movie.