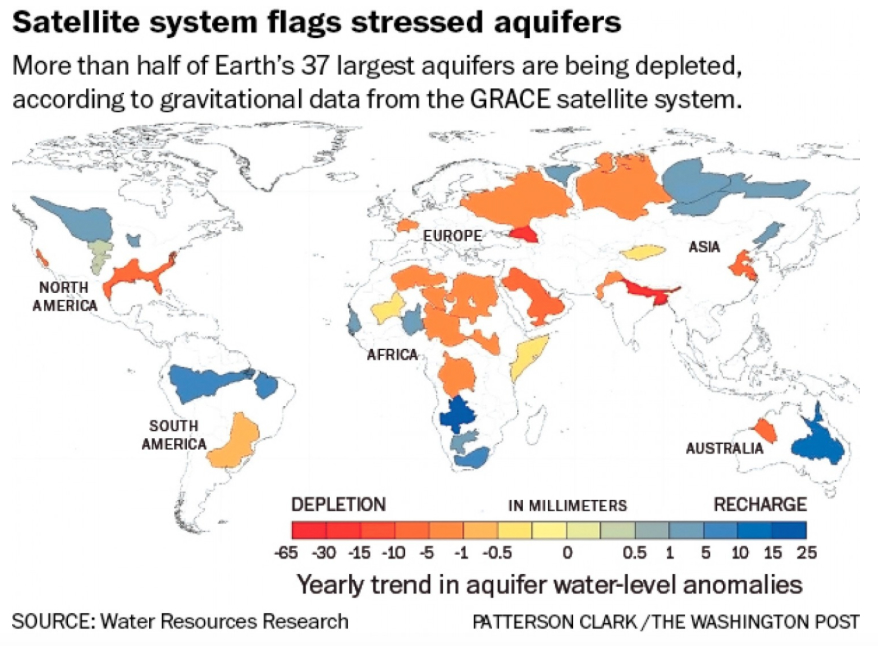 It’s not happening today or tomorrow, but we’re slowly running out of water, new NASA data shows. Looking down at the planet using its GRACE satellites over a period of ten years, the researchers at NASA discovered that more than half of Earth’s 37 largest aquifers are being depleted at an alarming rate, far faster than they can be replenished.

DON’T MISS: TWC is About to be Sued for Violating Net Neutrality Rules and Holding Traffic for Ransom

Aquifers are underground sources of water used by hundreds of millions of people. 21 of them have apparently passed their sustainability tipping points, which means that more water has been removed than replenished during from 2003 to 2013. The Arabian Aquifer is the most stressed one, serving more than 60 million people.

The special satellites are able to detect and precisely measure subtle changes in the Earth’s gravitational pull, The Washington Post reports, and register where the heavier weight of water exerts a greater pull on the spacecraft.

“The situation is quite critical,” NASA Jet Propulsion Laboratory senior water scientist Jay Famiglietti said. “The water table is dropping all over the world,” he said. “There’s not an infinite supply of water.”

“We need to get our heads together on how we manage groundwater,” he said, “because we’re running out of it.”

There are many factors affecting aquifers, as more people are drilling for water for various purposes, from drinking to irrigation and mining. The most affected areas are the heavily populated ones where there aren’t many alternative water sources. Meanwhile, most of the evaporated groundwater reaches the oceans rather than getting back to aquifers.

According to the researcher, problems with groundwater are further exacerbated by global warming, which has caused regions near the equator to get drier and more extreme latitudes to get wetter and experience heavier rains.

“People living in mid-range latitudes not only pump more water from aquifers to contend with drier conditions, but that water — once removed from the ground — also then evaporates and gets recirculated to areas far north and south,” the Post notes.

More details about NASA’s new water studies are available at the source link.