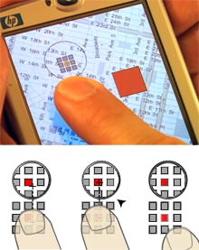 If you’re an uber-nerd like me, you actually watched Steve Jobs and his entire Keynote address the day that he announced the iPhone. You also proceeded to drool uncontrollably (sorry, new laptop) when you saw how you used your finger to scroll and move around. Well, in the continuing battle between Microsoft and Apple, The Death Star Microsoft has thrown together a fancy interface of their own. It’s called “Shift”. Essentially intended to replace a stylus, you simply hold your finger on the area you’d like to magnify, and soon a crosshair will pop up…you now use your finger to slide around for pinpoint accuracy. Still not as cool as the iPhone, but hey, at least they’re trying.