Motorola Z9 unveiled! Can ya feel it? Huh, huh? 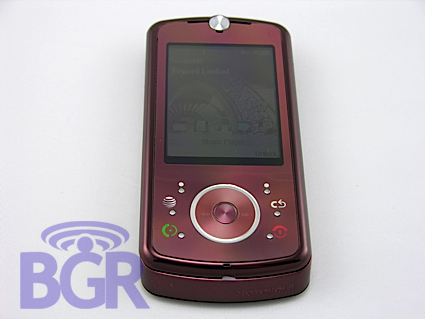 Motorola has been oh so sneaky with the handsets as of late, and we’ve hit the jackpot. Motorola’s Z9 is apparently a new slider phone which bears resemblance to the RAZR 2 series. Oh, and get this — it’s AT&T branded with an AT&T browser key, and even AT&T firmware. Some quick specs include 3G (which was not working on our unit), a 2 megapixel camera with flash, Motorola Synergy OS, Live Video Share, and expandable memory via microSD card. The construction is real good on this, and that’s not saying much; it’s an early prototype we scored from deep, deep down inside Moto HQ. The buttons are a little stiff, but again — early unit. The Motorola Z9 also takes cues from AT&T’s upcoming Motorola V9 handset. If there is anything you want to know specifically about the new Motorola Z9, drop us a comment, and we’ll check it out. To see more, head on over to our gallery!