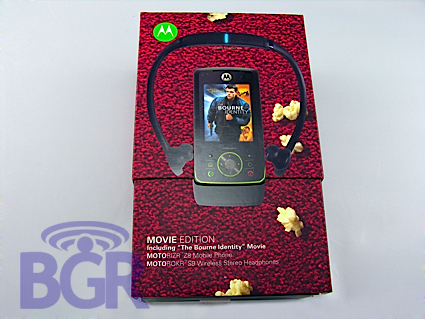 We’ve been following the Motorola Z8 for a while now, and quite frankly it’s an object of lust for us. It features a “kick-flip” slider function that lets the phone curve to your face instead of awkwardly holding up a regular slider. It actually runs Symbian OS 9.2 UIQ 3.2 which we believe is a first from any handset manufacturer, not just Moto. How does it fare? Pretty good. The phone itself, looks amazing. It’s very well thought out and constructed. The only physical problem we had with the phone, was that the charging ports are at the bottom of the device, and they are in a box that kind of sticks out. So holding with one hand was a little uncomfortable sometimes. We really can’t figure out the OS for the life of us…It tries to be Creme Brule when it should try to be Jello. The keypad is very small and a little cramped, but what really got us is that keys have to be pushed very hard to register a response, and have almost no tactile feedback. It’s a quad-band GSM/EDGE/UMTS/HSDPA phone (3G on 2100MHz band only) with a 2 megapixel camera, unique sliding form-factor, a new OS, and a great design. This particle package comes with the great Motorola S9 A2DP headsets, and The Bourne Identity movie pre-loaded onto a microSD card. I think the general impression around here is that we just have to get used the device to make a firm conclusion. So far, we do like it though.

Thanks to CTI Miami for the hookup!

Click on over to our Motorola Z8 unboxing gallery!