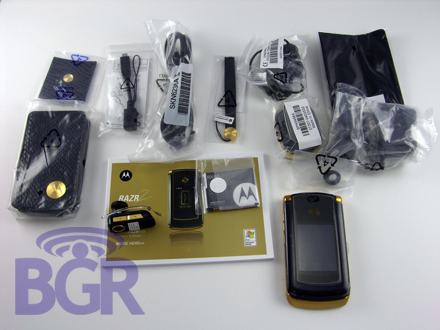 We’ve professed our love for the Motorola RAZR 2 way back when we scored one, but this is a whole ‘nother story. We still have bad feelings towards Moto for the Dolce & Gabbana debacle they pulled before. If you don’t know, they had a super limited Motorola V3i only sold at Dolce & Gabbana shops, and they were limited to 2,000 pieces. A short time after they sold out, Motorola released a “different” Dolce & Gabanna V3i, with it ending up on T-Mobile USA nonetheless! Do we think that will happen this time around? Most definitely! Back to the phone…it really is a sharp device! The Motorola RAZR 2 Luxury Edition has 18kt and 24kt gold accents around it, a “snakeskin” back (which we thought we hated, but then secretly loved), and probably the most accessories we’ve ever seen come in a Moto box! They included the phone, battery, battery cover, snakeskin and gold carrying strap, snakeskin and gold carrying pouch, phone / screen cleaning cloth, charger, miniUSB to microUSB adapter, Motorola H680 limited edition gold and black Bluetooth headset, desktop charger for headset (with gold trim around charging base), USB headphones, microUSB cable, and a couple other things! If you’re feeling like you are special and deserve a special handset, we’d say you can’t go wrong with the RAZR 2 Luxury Edition. But, know that you might see it in peasants’ hands everywhere beginning whenever Moto deems it “reasonable”. And of course hit the link below for the gold treats!

Click on over to our Motorola RAZR 2 Luxury Edition Unboxing gallery!