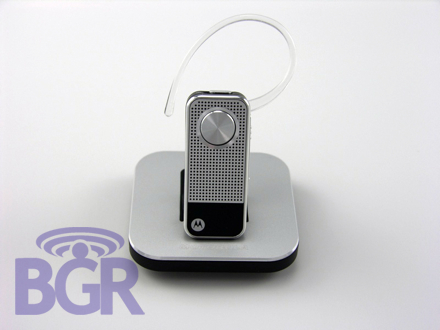 We heard the news, and we checked it out, too. In our earlier findings, we were a little disappointed with the headset’s “noise-cancellation” functionalities, but after we spoke to a head engineer from Moto, we decided to give it another go. What we were told actually makes sense — the noise-cancellation works best in “real-life” conditions. We immediately thought of comparing it to the all-mighty Jawbone and proceeded to blast music and noise as loud as we could while trying to hold a conversation using the Motorola H12 headset. The headset, in so many words, told us to get lost. Why would a noise-cancelling headset not cancel the noise? The response we got was that those situations are avoidable. If you’re in the car with the radio blasting, the windows open, going 80MPH and trying to talk to someone at the same time, you might as well close the windows and turn the radio down, right? The situations described to us as working the best did, in fact, perform amazingly well. Some of these were a crowded and noisy bar / club, Times Square with pretty decent winds, and a sporting event. From our initial impressions, we called it one of most comfortable, if not, the most comfortable Bluetooth headset of all time. This still holds true, and when you’re in cahoots with the noise-cancellation processor, you’ll be loving every MOTOPURE minute of the H12 Bluetooth headset.

P.S. We pushed and begged, but the canned response we got indicated that this is the only color choice for the near future. Knowing Moto though, we’d expect these in M&M’s colors, Skittles colors, and a “luxury” edition soon.