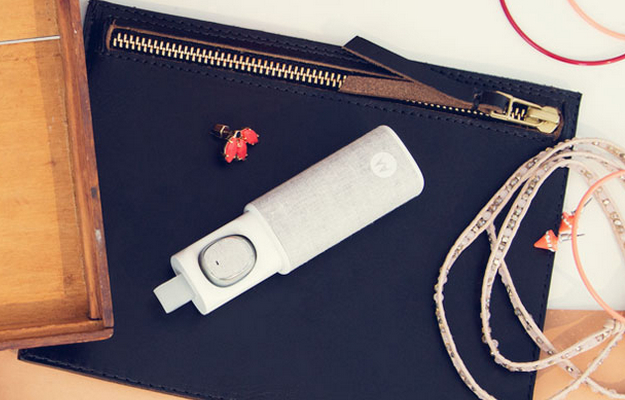 Motorola on early Friday unveiled two new smartphones, the second-generation Moto X and second-generation Moto G, the Moto 360 wearable, but also some interesting accessories that should make your Moto X experience even better, provided you choose to buy either model later this year. These are the Moto Hint, a tiny wireless earbud that you’ll hardly notice, and the Motorola Power Pack Micro, a battery pack ready to quickly charge a phone and even find it.

Priced at a hefty $149.99, the Moto Hint is a Bluetooth headset like nothing you’ve seen before, at least in real world, as it’ll certainly remind some people about a similar device used by the main character in the movie Her to communicate with the advanced computer at all times.

Once placed in the ear, users will be able to interact with the always listening Moto X by simply asking questions. The Moto Hint will also deliver notifications, make calls and send messages and voice-based navigation without the user having to touch the phone.

The Moto Hint offers up to 10 hours of talk time, and comes with a special charging case that will deliver two extra charges, if that’s needed.

Speaking of charging powers, that’s what the Power Pack Micro does for a living. The portable charger packs an additional 1,500mAh charge and it’s quite portable, measuring just 60 x 41 x 17mm. Furthermore, the Power Pack Micro also comes with some smart features, as it can be used to find a lost phone thanks to the built-in Motorola Keylink feature (the phone can also be used to find the charger that could be placed on a lost key ring for example), and will also tell users when it needs to be charged via the Motorola Connect feature.

The Power Pack Micro costs $39.99 and will be shipping “soon,” just like the Moto Hint.

Both accessories will also work with other devices, not just Motorola’s newest handsets.