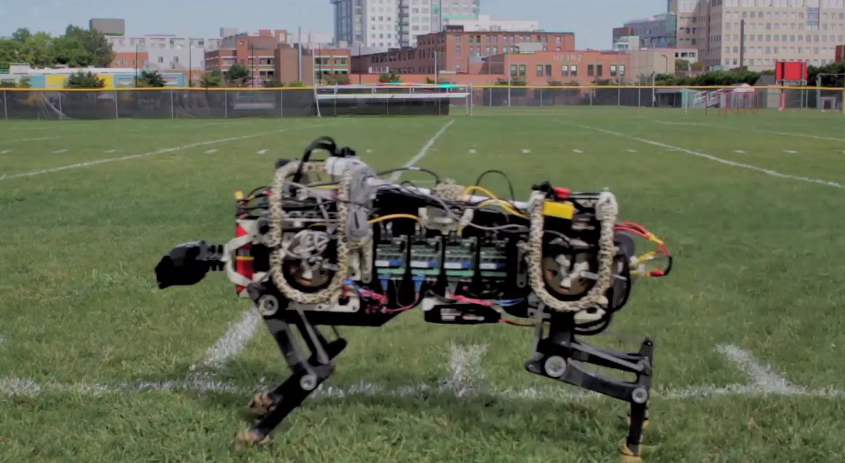 Remember Boston Dynamics’ robot cheetah that can run at speeds topping 28 mph on a treadmill indoors, and which now belongs to Google? Well, that’s not the only robot cheetah in town, as MIT also has developed a similar robot, MIT News reports. And as seen in an awesome new video, this crazy robotic cheetah can now run around outside without being tethered.

MIT’s robot cheetah may also reach a theoretical speed of up to 30 mph in the future, but the current testing speed is at around 10 mph. Impressively, the robot can continue running even after jumping over obstacles, and can deal with hurdles that are up to one foot high. Sure, that’s nothing like the 60 mph that real cheetahs have no problem reaching, but it’s still a major accomplishment for a robot.

MIT is studying movement of animals, and the ways they can be used for robots in the future in order to improve both speed and safety. The robot is powered by a “custom-designed, high-torque-density electric motor,” and “custom-designed, bio-inspired legs,” but also by a special algorithm that allows it to run at constant speeds without falling, even in outdoor conditions where the terrain isn’t controlled.

“Most robots are sluggish and heavy, and thus they cannot control force in high-speed situations,” MIT associate professor of mechanical engineering
Sangbae Kim says. “That’s what makes the MIT cheetah so special: You can actually control the force profile for a very short period of time, followed by a hefty impact with the ground, which makes it more stable, agile, and dynamic.”

“Our robot can be silent and as efficient as animals. The only things you hear are the feet hitting the ground. This is kind of a new paradigm where we’re controlling force in a highly dynamic situation. Any legged robot should be able to do this in the future,” he added.

A video that explains MIT’s robot cheetah and shows it in action follows below, with the full MIT News article available at the source link.