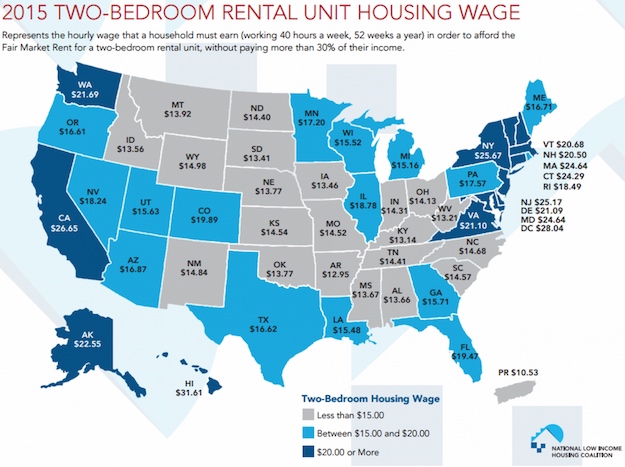 Newly released data from a National Low Income Housing Coalition report shows how much one needs to earn per hour at a minimum in order to afford a two bedroom apartment across each state. Naturally, states like California and New York are particularly expensive, with individuals there respectively needing to earn $26.85 and $25.67 per hour in order to afford an average two bedroom.

The report, aptly titled Out of Reach, is particularly illuminating given the ongoing battle in some states to raise the minimum wage rate to $15/hr.

The report further shows that individuals earning minimum wage can’t even afford a one bedroom apartment while working a standard 40 hour work week. In some states, minimum wage workers would have to work well over 90 hours in order to afford an average one bedroom.

The preface to the report, penned by Oregon Governor Kate Brown, reads in part:

The data in Out of Reach is sobering. In my home state of Oregon, and in communities across the country, working families searching for affordable rental units find little to nothing in their price range. There simply isn’t enough reasonably priced, decently maintained housing to meet the demand, and rapidly rising rents outpace wages. As a result, one out of four households spends more than half their income on housing costs. People with low or fixed incomes face even bleaker situations.

Home ownership rates have reached historic lows, and as fewer people buy homes, rental markets rapidly tighten. Rental vacancy rates in some parts of Oregon are less than one percent, driving rents far above what most low-income households can afford.

As for the states least hospitable to renters, the following chart maps out which states have the largest gap between the average renter’s salary and an average two bedroom.

The entire report is well worth a read as it paints a vivid picture detailing the harsh economic realities surrounding skyrocketing rental prices in many cities across the U.S.