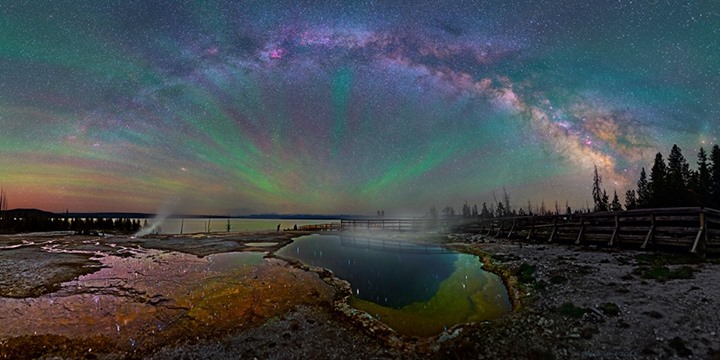 The picture you see above looks like a surrealist painting, but it’s not. It was taken by photographer Dave Lane, who photographed the Abyss Pool in Yellowstone Park just after a storm had passed the area,

“The airglow was crazy,” Lane explained on Facebook. “This is all actual airglow only slightly enhanced. Normally I decrease saturation on airglow 10% this time I went up 10% and it’s stunning I think.”

As io9 explains, airglow is that phenomenon where there’s a faint emission of light in the atmosphere, which prevents the night sky from ever being completely dark.

This isn’t Lane’s only such spectacular photo of the night skies. A similar picture that was taken last August has been included in NASA’s Astronomy Picture of the Day (APOD) archive, which contains several other mesmerizing pictures of our skies — see that second image below.

The photographer, clearly very passionate about our night skies, explained on Facebook the secret behind his amazing photos.

“Get away from the light drive out 20-30 miles out of town and look up on a clear dark night and you may see something that will forever change your life. This is what a galaxy looks like from the inside,” he wrote in the comments section of the APOD image above.