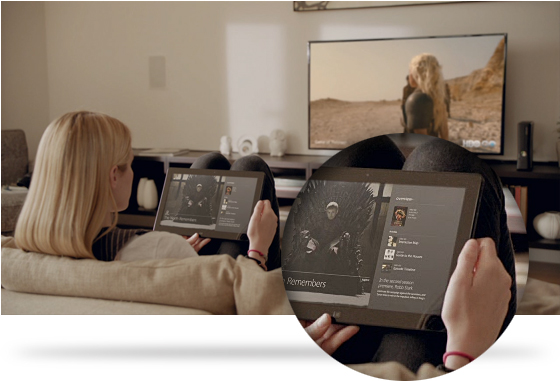 As Microsoft (MSFT) braces for its Windows 8 launch, it’s also making good on its promise to flip the switch on Xbox SmartGlass by the end of the year. The Redmond, Washington-based company announced on its official blog that SmartGlass, a free Xbox 360 companion app for Windows 8 tablets, on October 26th. It will also be available on Windows Phone 8 on October 29th and for iOS and Android in 2013. Unlike the Wii U’s GamePad controller or the PlayStation 3’s remote play connectivity with the PS Vita, SmartGlass works with a person’s existing tablets and smartphones.

SmartGlass isn’t just a fancy touchscreen remote control app for the Xbox 360 — it’s much more than that. With the app, users can start a movie on any mobile device and resume on the Xbox 360 (and vice versa), monitor real-time sports stats, bios and highlights on a secondary display, navigate the newly added Internet Explorer with multitouch gestures such as pinch-to-zoom and enhance gameplay with new gameplay options.

To learn more about what SmartGlass can do, you can visit Microsoft’s official page here or watch the a demo of the new app in the video below.