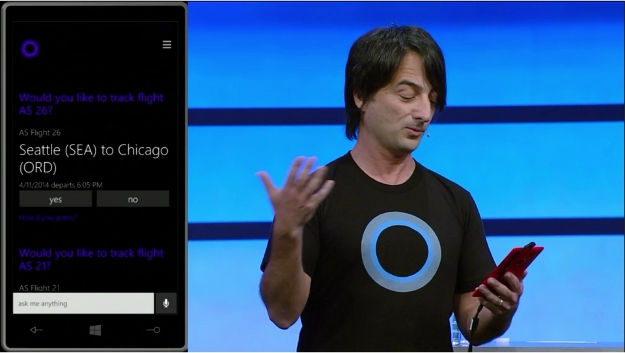 Microsoft officially unveiled Cortana at the Build Developer Conference on Wednesday, its own take on a personal assistant for mobile devices. We’ve known about Cortana for quite some time, as repeated leaks have slowly revealed the specifics of the new feature, but Microsoft is finally ready to share everything we need to know.

Cortana, which will be launching in beta alongside Windows Phone 8.1, takes the form of two concentric circles which animate when she speaks. Unlike Siri or S Voice, Cortana will be a focal point of the mobile operating system, replacing search entirely on Windows Phone devices.

When you access Cortana, you’ll see continually updating suggestions for what you should search, many of which will be contextual depending on the content of your phone. Cortana has access to as much or as little of your phone as you’d like, allowing her to set reminders and alarms, send messages, make calls, create a note, play music and more.

In “Cortana’s Notebook,” you can customize your assistant to your liking, letting her know what your interests are and when to leave you alone. You can also set up an Inner Circle — a group of your most important contacts — so that Cortana will know who should be able to get through to you no matter the time of day.

The more you use Cortana, the more she’ll learn about you and how you use your phone. When you travel to certain places frequently, Cortana will keep track. If you allow Cortana to access your email account, her functionality will increase even further, allowing her to track your flights and meetings.

Cortana is another step in the right direction for Microsoft and the Windows Phone platform. It’s difficult to play catch-up, but the team behind Cortana is making its personal assistant as functional and useful as any other similar feature on the market.