A month with the Microsoft Surface 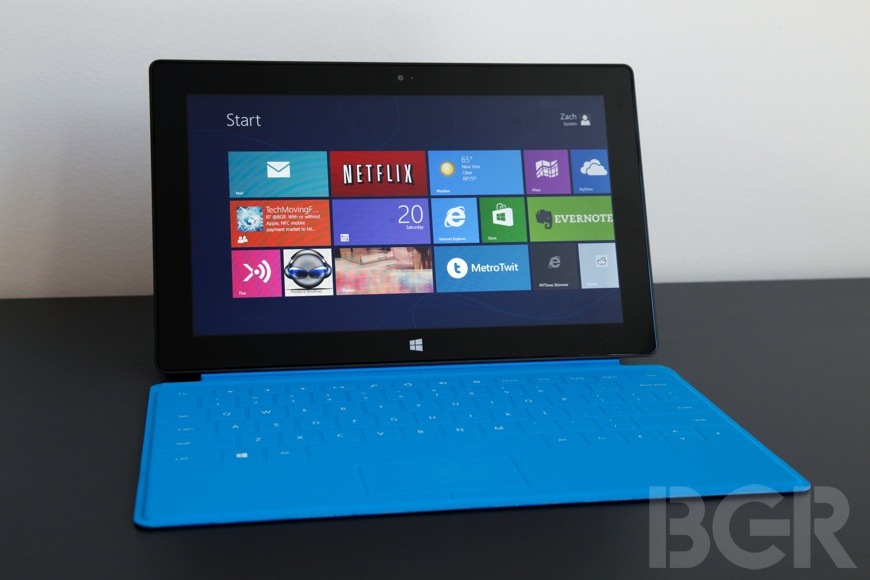 The Microsoft Surface got off to a shaky start. Preorder demand seemed strong for Microsoft’s (MSFT) debut tablet but the company made it a point to note that initial supply would be limited following the Surface’s launch. CEO Steve Ballmer then stated on multiple occasions that Surface sales have been relatively slow, likely in an effort to keep investors’ expectations in check. Microsoft’s partners have slammed the Surface time and time again, and analysts have done the same. Is Microsoft’s premiere Windows hardware offering doomed to crash and burn?

UPDATE: Interested in the Windows 8 version of Microsoft’s tablet? Be sure to check out our Microsoft Surface Pro review!

I reviewed the Surface along with other early reviewers last month, but my opinion differed pretty dramatically from the consensus. Where a number of reviews seemingly couldn’t get past the slate’s Windows RT operating system, I saw a usable young platform with potential. My review noted a number of limitations including some performance issues and a lack of available apps, of course, but in the end I found it to be an amazing piece of hardware — my favorite tablet hardware, in fact — with software that could definitely get the job done for many different types of users.

I have now spent more than a month with Microsoft’s Surface. While I did not use it as my main computer during that period of time, I worked on it several times each week, I used it in place of the iPad for nearly all personal functions, and I carried it with me as much as possible. Here are my thoughts after a month with the Surface:

First and foremost, I still firmly believe that Microsoft has built the best tablet on the planet in terms of hardware. Seriously.

The Surface isn’t anywhere near as thin as Apple’s (AAPL) fourth-generation iPad but the thicker case is easy to forgive when you consider the various advantages the Surface offers. For one thing, it features dedicated charger, USB and HD video-out ports. The ability to charge the tablet while an accessory or a flash drive is plugged in and while connected to a second monitor or TV is a welcome change from the single-port setup on the iPad. The Surface also features stereo speakers on either side of the top of the device when held in landscape — where speakers should be — along with a microSD slot and a kickstand.

The kickstand is a huge benefit for the Surface. Machined from the same “VaporMg” magnesium as the rest of the Surface’s case, the integrated kickstand props the tablet up on a table or even on a user’s lap quite comfortably. The result is a tablet that is perfect for watching movies or TV shows in any setting. Add on Microsoft’s Touch Cover or Type Cover and you have a legitimate notebook computer that occupies a fraction of the space despite its full size keyboard.

And speaking of that full size keyboard, I like Microsoft’s Touch Cover and Type Cover even more now than I did when I first reviewed the Surface.

I have gotten to the point where I type about 80% as fast on the Touch Cover as I do on my standard keyboard (I use a Logitech diNovo Edge). While a 20% reduction in speed is significant, I’ll gladly take that hit in exchange for a keyboard cover that protects my tablet’s display, is just 3 millimeters thin, and effectively adds no weight to the device.

When it comes to working on the Surface though, I’ve been having a tough time.

The utility of a device in a work environment will always vary dramatically depending on what the user does for a living. Some people can do their jobs just fine on the iPad, for example, while others laugh at the idea of even trying to work on Apple’s tablet. I fall into the latter category.

If you live in Microsoft Office apps like Word and Excel, it just doesn’t get any better than the Surface. This is a $499 tablet that offers a true desktop Office experience — for free — that is so much better than similar experiences on the iPad or on Android tablets, there isn’t even a usable scale for comparison. Multitasking and switching between open apps is also a far better experience on the Surface than it is on any other tablet.

Trouble arises when users need more specialized software to do their jobs, even if that software is relatively simple.

I live in three apps to do much of my job here at BGR. The first is a Web browser, and while the stripped down version of Internet Explorer 10 in Windows RT is far less capable than my browser of choice on Windows 7/8 and OS X (Chrome), it handles our CMS well enough to get the job done. Switching between tabs is something of a pain on the Surface when using a mouse or trackpad, but support for all of Windows’ standard keyboard shortcuts means CTRL+TAB and CTRL+SHFT+TAB work just as we’ve come to expect.

The second app I live in is Outlook. Windows RT’s email client is nowhere near as capable as Outlook on a PC or Mac, and it also slows down a lot. I use Outlook Web Access (OWA) in the Surface’s browser instead, though I would definitely prefer a fully functional native Outlook app.

Finally, I need a good photo editor. Photoshop is my weapon of choice, which of course is not available for Microsoft’s lite version of Windows. I have found a few options that offer very basic editing but for more complex jobs, there’s simply nothing available for Windows RT that can replace Adobe’s image editor.

Apps are still the Surface’s biggest problem for all the reasons I covered in my initial review. Good apps are very hard to come by and many popular tablet apps simply aren’t available for Windows RT. Some will launch eventually and others might never make it to the Surface.

Performance is also still an issue. Microsoft has issued a number of software updates since I published my Surface review, including a major firmware update that was supposed to help app performance. Unfortunately, I haven’t noticed any difference. Apps like Music that were sluggish before are still sluggish now, and that applies to Microsoft apps as well as third-party apps.

I love the hardware as much as I did a month ago but several software issues have gotten trying with time. Some of them aren’t really a big deal — waiting three or four seconds as opposed to one or two for an app to open is not a huge problem. Other issues are more significant though, such as the lack of available applications and the general sluggishness seen in many of the apps that are available.

When Microsoft makes the Surface with Windows 8 Pro available, however, one of the tablet’s biggest barriers will disappear instantly. Barring unforeseen issues, each and every app currently available for Windows 7 will be accessible immediately on the Surface Pro. Hundreds of thousands of applications will all available from day one when the Surface Pro launches early next year.

Performance issues will likely also be addressed on the second version of Microsoft’s tablet, as the Surface with Windows 8 Pro features a third-generation Intel Core i5 processor and 4GB of dual-channel RAM. Add on an upgraded 1080p HD display along with pen input support and you’ve got an enterprise-grade, touch-enabled, half-inch-thick notebook PC that also happens to be a tablet.

As it stands, the Surface is an outstanding product. In many ways, it bests market leaders like Apple’s iPad and Google’s (GOOG) Nexus 10. In other ways, it falls short. It is a remarkably versatile tablet that promotes productivity while remaining portable and affordable. But it also has a serious app problem that Microsoft is all too familiar with and issues with app sluggishness that have not yet been resolved.

I’ll continue to use my Surface review unit and I very much look forward to seeing how the experience evolves over time as Microsoft refines the software and as more developers (hopefully) embrace the platform.

The potential is there — I see it now as much as I saw it when I first reviewed the Surface. Whether or not Microsoft’s first tablet will ever realize its full potential remains to be seen.