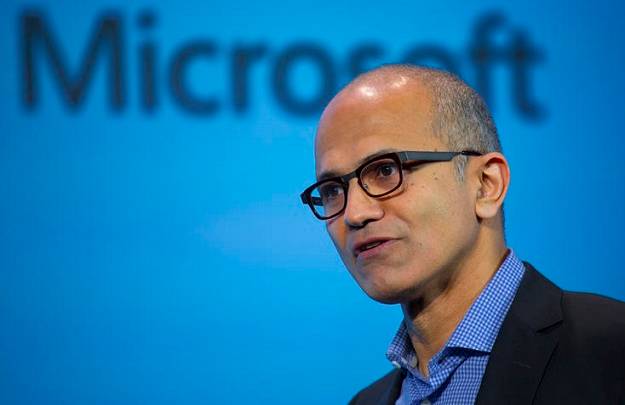 When Apple introduced the iPad Pro last week, it called up two of its oldest rivals to help sell the device: Adobe and Microsoft. For many, this was quite a sight to behold. For years, Apple and Adobe engaged in a bitter war of words over the former’s reluctance to support flash on iOS devices. As for Apple and Microsoft? Well, their decades-old rivalry certainly needs no introduction.

So when both companies took the stage at Apple’s special event last week to sing the praises of Apple’s upcoming new tablet, it was a funny reminder of how quickly the technological landscape can change.

“I’m going to first start on this iPhone, and it’s not my phone, but it is an iPhone,” Nadella said as he began his presentation.

“It’s a pretty unique iPhone,” Nadella continued. “In fact, I’d like to call it the ‘iPhone Pro’ because it’s got all of the Microsoft software and applications on it.”

Of course, it’s not as if Nadella was completely oblivious to the inherent humor of him using an iPhone up on stage. When it came time for him to put the iPhone down, he quickly added, “Let’s move on to my Windows Phone, which I use more often.”

Taking a step back, Microsoft’s presence at Dreamforce alone signals that the company has grown up quite a bit with Nadella steering the ship.

Just the fact that he is on stage is proof of the so-called “new Microsoft.” It wouldn’t have ever happened just a couple years ago, as Microsoft and Salesforce used to publicly criticize each other during bygone eras. But things have changed as Nadella continues to usher in a softer, more competition-friendly culture.

Now well into his second year at the helm, Nadella has worked to bring Microsoft’s key products to competing devices, even opening things up to Apple and extending an olive branch to cloud storage competitor Box.

Indeed, Microsoft is now popping up at Apple special events and using competing products to showcase their software.