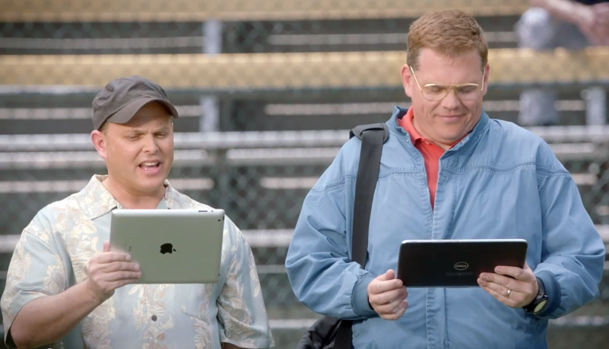 Microsoft wasn’t a big fan of Apple’s “I’m a Mac” campaign a few years ago, but the world’s largest software company seems to enjoy putting the shoe on the other foot. Following three other ads that pitted Apple’s iPad against tablets running its Windows 8 and Windows RT software, Microsoft has now issued a new ad along the same lines. In this fourth spot, two baseball scouts compete to sign a young pitcher. The scout with the Window 8 tablet video conferences with his boss while launching and navigating other apps on the same screen, while the scout with an iPad struggles to switch back and forth between apps to answer questions from his boss. Guess which scout nabs the promising young prospect? The ad concludes with an apropos pun: “Do two things at once without dropping the ball.” The full video is embedded below.