E3 Preview: Metal Gear Solid V is enormous, ambitious and as weird as ever 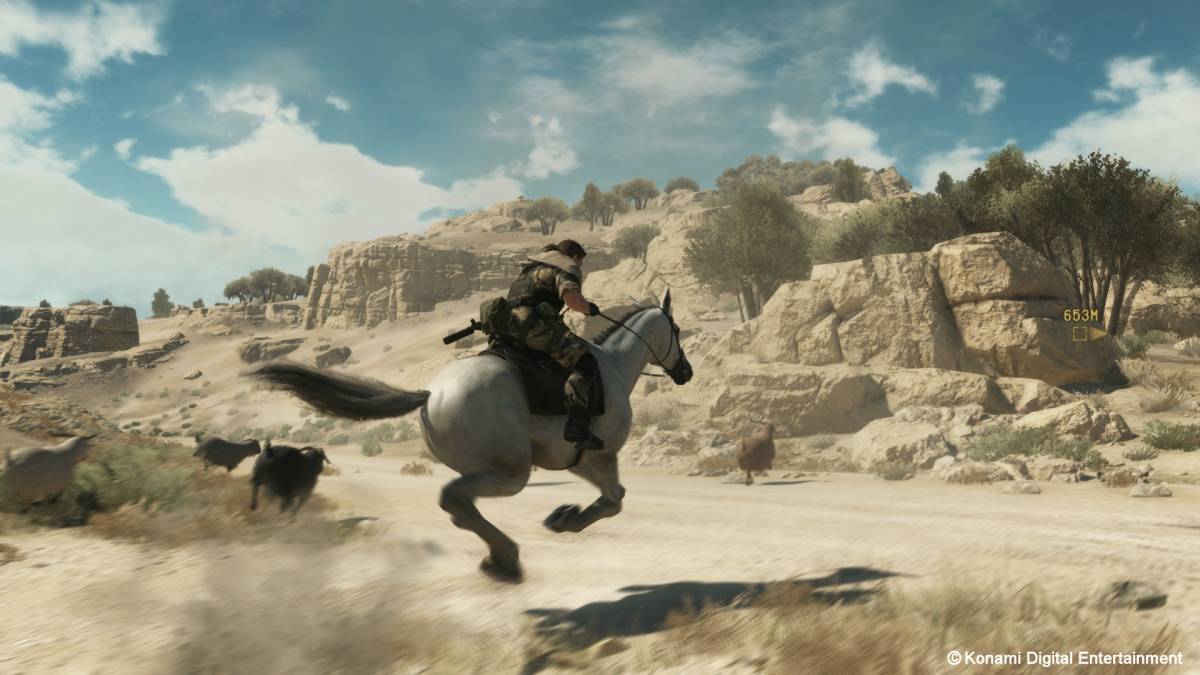 If it had a release date, Metal Gear Solid V: The Phantom Pain might have been my game of the show. I was a late comer to the series, but from the opening moment of the trailer at Sony’s press conference to the gameplay demo I saw on the last day of E3, I couldn’t have been more excited to finally get my hands on the first open world Metal Gear game. Sadly, it’ll be a while before any of us get to play MGS V.

The demo, conducted by Kojima Productions’ Tan “Jackie” Ziang, began in the desert of Afghanistan, an environment anyone keeping up with the development of The Phantom Pain should be very familiar with. Big Boss rides in on a horse, tasked with saving a hostage in a nearby encampment.

The immediate takeaway from the demo was the sheer enormity of the game’s map. The open world of The Phantom Pain will be 200x the size of Ground Zeroes, full of wildlife, populated settlements, items to collect and mountains to scale. Kojima has said in the past that there will be multiple varied environments throughout the game, but I got a strong Red Dead Redemption vibe as Big Boss galloped in on his horse. Red Dead Redemption vibes are never a bad thing.

Once we arrived at the encampment, Big Boss set up on a nearby hill to scout for opposing soldiers. It’s vital to tag everyone you can see from afar before you make your approach to ensure safe passage to your destination. Before we had a chance to tag everyone in the camp, the sun began to set, limiting our visibility. In this open world, time will pass by dynamically, but you won’t have to wait around until the sun rises – Big Boss’s Phantom Cigar acts as a fast-forward button, advancing time at a massively accelerated rate.

Once the sun had risen, Big Boss made his way down to the camp, holding up enemies along the way. After dispatching the first two guards, Big Boss used the Fulton recovery system, returning from Metal Gear Solid: Peace Walker, to ship the unconscious guards back to Mother Base. You can use the Fulton system not only to recruit guards to the Diamond Dogs (Big Boss’s band of mercenaries), but also to ship containers, vehicles and other equipment back to the base. Also sheep, if that’s your thing.

As Big Boss continued down the path, his iDroid (yes, I know) alerted him to an incoming sandstorm. Weather will also change dynamically throughout the day, affecting everyone’s visibility as well as the effectiveness of the Fulton. If you send a guard up in a sandstorm, there’s a decent probability he won’t make it back in one piece.

The rest of the mission was business as usual for the Metal Gear Solid series. Big Boss used his prosthetic limb to lure guards away from their posts, only to wrestle them into submission with the series’ signature close quarters combat (CQC). Sneaking up behind enemies with a pistol drawn gave Big Boss the opportunity to interrogate, learning more about his surroundings. Even the classic cardboard box made its return, but Big Boss is able to pop out of the top to quickly cap nearby foes or slink out the side to escape pursuers who might have spotted the box as it was waddling along.

Once we finally reached our objective, we discovered that the kidnapped friendly had been Ziang, the man running our demo, all along. After a few failed attempts of Fultoning Jackie indoors, we dragged him outside and sent him back to Mother Base. Unfortunately, real-life Jackie wasn’t able to make it out cleanly, so a firefight began and an escape helicopter was called in at the nearest available location. After calling in an airstrike for good measure, Big Boss made his escape.

Much of the Afghanistan environment had been shown off in the past, but E3 2014 marked the first time that we were able to get a look at Mother Base, which appeared to be an enormous oil rig in the middle of the ocean. As the screen faded back in, Big Boss was arriving at Mother Base, greeted by the newly recruited Diamond Dogs he had sent back via balloon as well as Jackie himself. And that sheep from earlier — the sheep made it back to Mother Base too.

Anything you collect or Fulton back to base will help build up GMP, the game’s currency, which can then be used to call in equipment while out in the field or to expand Mother Base. You’ll have the option to grow Mother Base any way you choose, which means your base will be unique from the bases that other players design.

Mother Base isn’t just an island paradise though – make enough enemies during your missions on the mainland and your custom base will occasionally be attacked. Unfortunately, the demo ended just as the Diamond Dogs had begun rushing to their battle stations, but the extended look at Metal Gear Solid V definitely left me wanting more. There’s no telling when the team at Kojima Productions will be ready to release The Phantom Pain, but it’s shaping up to be the most impressive game the studio has ever developed.