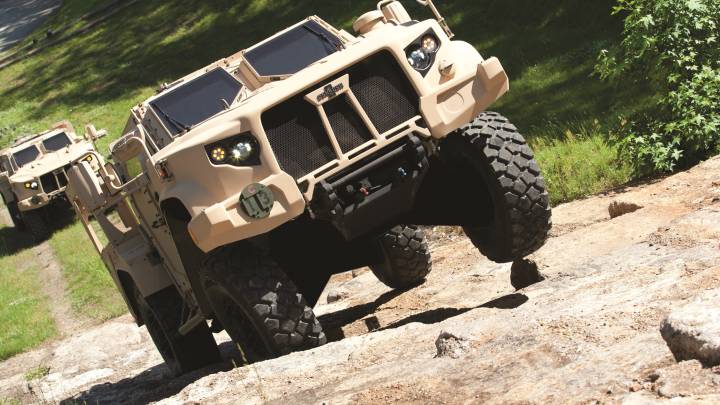 Move over Humvee, there’s a new vehicle in town that combines the ballistic protection of a light tank with the off-road mobility of a Baja racer.

Oshkosh Defense’s JLTV will be joining the U.S. Army and Marines in the battle space.

The competition to develop this vehicle for the military has been intense with Lockheed Martin, AM General, and Oshkosh as the final three. During this last stage, each company delivered 22 prototype vehicles that were put through very rigorous comprehensive testing over fourteen months.

U.S. troops will now have the advantage of the most capable light vehicle in the world.

This next-generation light vehicle is designed to move and protect American troops against the threats that have proliferated in today’s theatres of war like IEDs (Improvised Explosive Devices).

It has been described as the ideal combination of light tank ballistic protection, an MRAP (Mine-Resistant Ambush Protected)–level underbody bomb protection with the agility and flexibility of an off road race vehicle.

This new massively capable combat vehicle will be replacing the U.S. military’s iconic Humvees (HMMWVS) to provide troops with even more advanced protection and off-road mobility.

With the escalation in roadside bombs and mines throughout Iraq and Afghanistan, Humvees were ramped up with armor and Mine Resistant Ambush Protected Vehicle (MRAPS) made by Oshkosh with their heavy armor were introduced.

Troops must regularly contend with IEDs downrange and this threat will continue to be a problem.

The solution? The JTLV — it has as much armor as a light tank, but still gives troops speed and agility. It will provide Marines and Soldiers with better protection against this threat with improved payload and performance, and without the size of the MRAP.

Its enhanced speed means troops could travel more than 70 percent faster over rugged terrain than other standard vehicles like the M-ATV.

What’s cool about it?

In terms of enhanced mobility off-road, it has an adaptable suspension that can be raised and lowered with 20 inches of wheel travel.

So what about the firepower?  It has tube-launched missiles, remote weapons systems, as well as hands on turret operated ones.

There are two variants: a two-seater and a four-seater variant plus a companion trailer. The two-seat variant has one Utility base vehicle platform. There are two options in the four seater- the General Purpose (JLTV-GP) and the Close Combat Weapons Carrier (JLTV-CCWC).

The just-over $6.7 billion contract is expected to provide thousands of jobs in America’s heartland. The company announced that it plans to build the vehicle in Oshkosh, Wisconsin where they are the state’s largest defense contractor.

Production is expected to begin within the next two to three years with a whopping 3000 made a year.

Initially, OshKosh will be producing 17,000 JLTVs initially with the Marines will getting all of their vehicles up front. In 2018, the Army will decide whether to buy the rest. If they do, then it could mean more $30 billion in JLTVs for the military.

Oshkosh has been creating tactical wheeled vehicles for the US military for more than 90 years. In addition to the JLTV, they have created a wide range of vehicles including the remarkable TerraMax – a Transformer-like truck that can perform supply missions by itself.

JLTV production will begin early 2016 with deliveries beginning within 10 months.