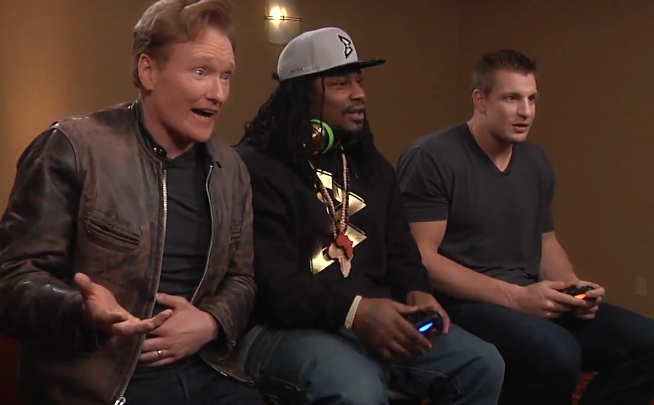 Marshawn “Beast Mode” Lynch and Rob Gronkowski are two of the NFL’s most entertaining personalities, although for very different reasons. While Gronk is a gregarious, hard-partying lug, Lynch is often hilariously unfriendly during media interviews and will often respond with a single sentence to every question he gets asked. Conan O’Brien decided to get the two of them together during Super Bowl week down in Arizona to play the yet-to-be-released game Mortal Kombat X and the results were about as amusing as you’d expect.

If you were playing video games in the ’90s, you’ll remember that the original Mortal Kombat caused a lot of controversy due to its gory finishing moves. Well, those moves are still in the new game and they’re even more disgusting than ever before, as they include up-close disembowelings as well as knifings of characters’ nether regions.

Gronk and Beast Mode also talk about what other games they love, with Lynch going off on a particularly funny ramble about his love for Mario Kart. And of course, Lynch is munching on some of his beloved Skittles throughout a good portion of the segment.