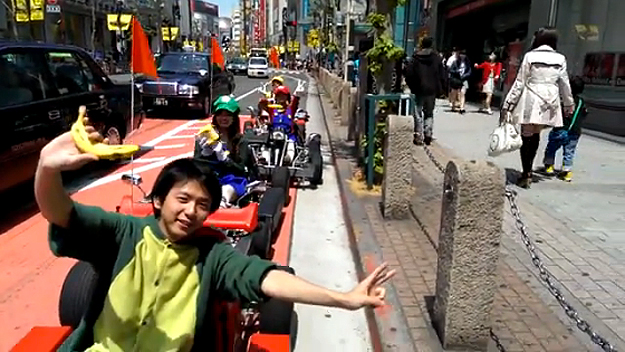 Nintendo’s recent release of Mario Kart 8 breathed new life into the company’s struggling Wii U console. In fact, we called it a killer Wii U game when we reviewed Mario Kart 8 back in May, and we said it was just what the Wii U needed. The newest edition in Nintendo’s popular racing series was apparently so good that it inspired a group of 12 people in Japan to reenact Mario Kart on the streets of Tokyo.

As seen in a video posted by The Telegraph, the team of a dozen racers dressed up as Mario Kart characters, armed themselves with weapons from the game (though Princess Peach happens to be eating her weapon in the video), and hopped on their go-karts for a race. Sadly, there is no footage of the heated battle, but hopefully no one hurt themselves or anyone else.