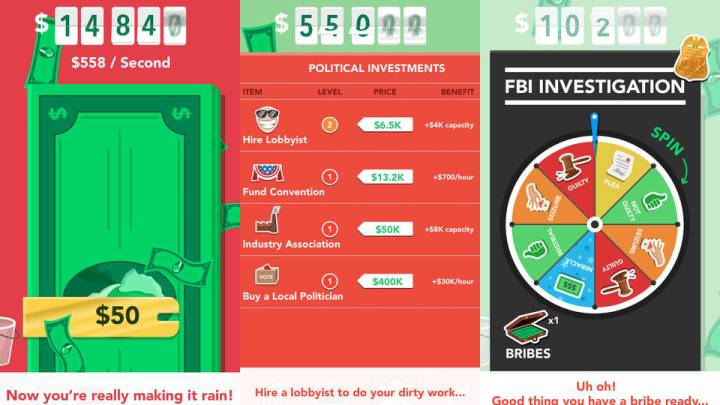 Make It Rain: The Love of Money is the latest addictive iOS game that has gone viral in the App Store, Re/code reports, having been downloaded 1.6 million times and raking in $50,000 per day from in-app purchases and ads. The game lets users make money on their smartphones – lots of cash – but there’s a catch: It’s only virtual cash they can spend in the game.

Users have to swipe as fast as they can to pile up money “hundreds, then thousands, then millions, then billions, then kill-billies, mega-billies, and beyond.” Once enough money is gathered, users can purchase various things like a clown college business, make political investments, or pay off an FBI agent or two who might arrive to inspect the large piles of cash sitting around in buckets.

“The new Flappy Bird is about income inequality and political corruption,” Make It Rain co-creator Josh Segall told the publication. “I wish we had been expecting it because maybe then we would have made a game that people would want to play for longer.”

The game is apparently popular with players even there’s really no end in sight, no matter how hard one swipes for money. One negative review that said one has to spend actual money to make virtual money without reaching an end still managed to find a positive message. “You end up scrambling for all this money, and for what? I’m definitely not happier I accumulated it. Valuable lesson,” the reviewer said.

Make It Rain is currently the most downloaded free iOS game in Apple’s App Store.