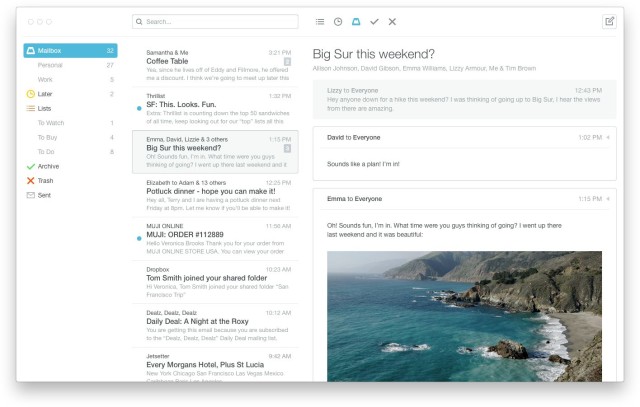 Mailbox is one of the most popular email apps on iPhone and Android as it’s won wide acclaim for helping its users “get to zero” emails. And now it looks like lucky OS X users will be able to use it on their desktops because the company’s Mailbox for Mac client is available in beta version on the company’s website and can be downloaded by anyone interested in giving it a try.

“Here’s how the beta rollout works: if you signed up for the wait list, keep an eye on your email over the coming weeks — we’ll be sending you a small attachment that we call a betacoin,” the company wrote on its blog. “This coin will unlock your copy of Mailbox for Mac and turn on the mobile ‘snooze to desktop’ feature.”

Users can still sign up for the beta, but it appears the app can be downloaded from the company’s website even without a “betacoin.”

In addition to offering similar features to what’s already available on iOS and Android, Mailbox for Mac will bring several new features, including draft support and the aforementioned “snooze to desktop” feature that lets users snooze their messages until they get back to their desks.

Draft support will also be available on Mailbox for iOS and Android in the future, allowing users to sync their email drafts across devices when signed in with their Dropbox account.