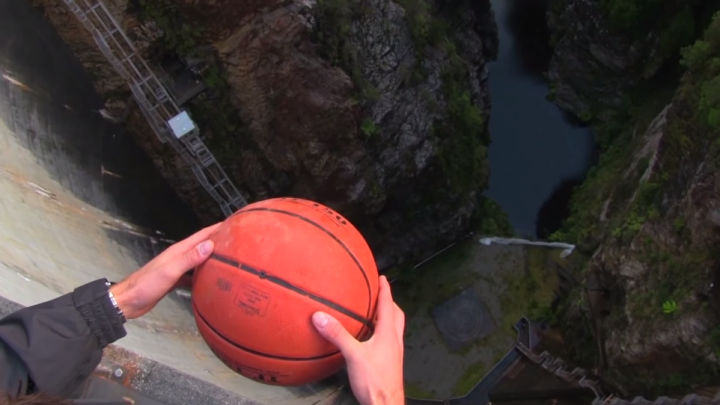 Science can just be so cool. If you want further evidence of this, you should watch an incredible new video of a basketball being dropped from the top of a 126-foot dam in Australia that shows the Magnus effect in action.

MORE SCIENCE: These tiny fish can survive in volcanoes and they’re the stuff of nightmares

The video first shows what happens when you just take a basketball and drop it from the top of the dam without applying any spin — it more or less falls straight down to the ground. However, if you put some spin on it and then drop it, the basketball will fall for a bit before taking off horizontally and flying in another direction. See for yourself here:

Why does this happen? As the video informs us, it’s due to something called the Magnus effect.

“The Magnus effect… affects all rotating balls or cylinders as they fly through the air,” the video explains. “As the basketball picks up speed, air on the front side of the ball is going the same direction as its spin, and therefore it gets dragged along with the ball and deflected back. Air on the other side is moving opposite to the ball’s spin, so the flow separates from the ball instead of getting deflected. The result is that the ball pushes the air one way so the air applies and equal force on the ball the other way.”

Next week we hope to see a video that uses a basketball giving us a demonstration of the Casimir effect, although we suspect that will be a wee bit trickier to pull off… and not to mention we’d be a little bit nervous about warping space-time to that extent using a simple basketball.

You can learn some more basics of the Magnus effect by clicking here.