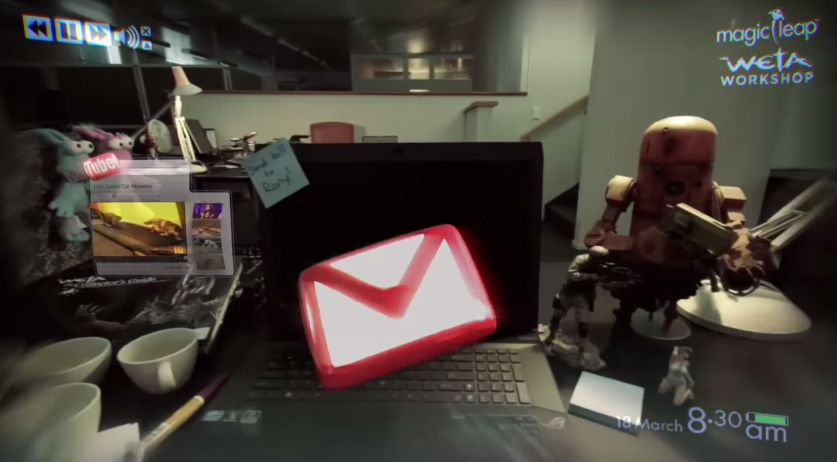 Forget about playing addictive mobile games or stalking your friends on Facebook while you’re supposed to be working. The future of procrastination already looks much better than that, as a new augmented/virtual reality concept video from Magic Leap shows us.

Backed by a massive $542 million Google investment, the company is working on some interesting things, including a unique approach for augmented and virtual reality apps and games, a technology it calls “cinematic reality,” which should offer a more immersive 3D experience than competitors, at least according to the company.

While it’s not clear yet whether the elements in the short clip below are already available on a functional prototype, or are simply concepts supposed to demo its vision, Magic Leap is definitely onto something: the company is trying to seamlessly blend 3D graphics projected directly onto the user’s retina with the real world to create a unique environment, in which the human eye wouldn’t immediately be able to tell the difference between digitally rendered and real objects.

As you can see in the video below, the company envisions a different way of interacting with smart devices in the future, whether it’s for work or pleasure. The concept video shows an augmented reality 3D app for Gmail, a virtual browser playing a YouTube video, but also an entertaining shooter game. All the visual effects used, including the 3D user interface that recognizes the user’s gestures and touches, are blended with elements from the real world: the game takes place in an actual office using it as background, and the YouTube browser looks like an extended monitor placed on a desk.

“Unfortunately, we couldn’t make it to TED, but we wanted to share one of the things that we’d planned to share at the talk,” the company said on YouTube. “This is a game we’re playing around the office right now (no robots were harmed in the making of this video).”

Virtual and augmented reality are getting hotter and hotter, as many companies have shown increased interest in the technology. Microsoft already has an interesting take on what augmented reality could offer in the future that’s somewhat similar to Magic Leap’s concepts, and companies including Facebook, Valve, Samsung and HTC also have virtual reality plans of their own.

Considering all these developments, reports saying that Google is already readying an Android version for virtual reality are hardly surprising, especially when looking at what a Magic Leap’s headset might have to offer.

The short but highly entertaining “Just another day in the office at Magic Leap” video follows below.