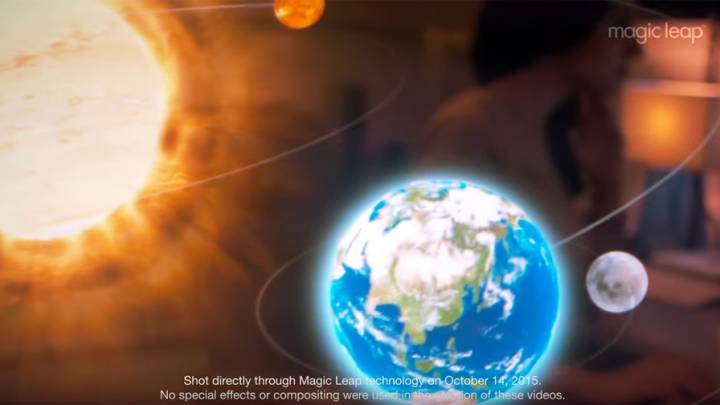 There was a huge amount of hype surrounding Windows 10 ahead of its release earlier this year, but another Microsoft product may have been even more worthy of our attention. The company’s HoloLens gave us a glimpse of what computing in the near future may be like, and it was awesome. But Microsoft is hardly the first company to dive into augmented reality. Long before Microsoft ever showed off its HoloLens product, a somewhat low-profile company called Magic Leap was busy behind the scenes cooking up an exciting augmented reality experience that we just got a taste of late last night.

During the WSJD technology conference on Tuesday night, Magic Leap CEO Rony Abovitz said on stage that his company is building “an operating system for reality.” Ambitious though it may seem, it appears as though Magic Leap is well on its way. Since taking on $542 million in funding from Google’s investment arm, Magic Leap has made great progress toward creating a paradigm-shifting augmented reality experience.

So, what is augmented reality?

While virtual reality immerses the viewer in a digital world, augmented reality (AR) places a digital layer over the viewer’s actual surroundings. For example, imagine walking down the street and seeing arrows floating in mid air that direct your path, rather than having to glance down at Google Maps on your smartphone for guidance. Imagine building a 3D model of something in the air in front of you, instead of with a mouse on a computer screen. These are the types of experiences companies like Magic Leap will enable.

The obvious question is this: how far are we from experiencing this type of technology? As shown in Magic Leap’s new demo video, we’re closer than you might think:

Magic Leap’s new video was created without using any special effects or other types of manipulation. This is indeed the experience the company’s current prototype hardware offers, placing virtual objects in the user’s field of view that are incorporated with his or her physical surroundings.

This is the second video Magic Leap has posted to YouTube, but it’s the first to give us a look at what using an actual Magic Leap device will be like. The company’s earlier video was posted this past March, but it was merely a concept video created using special effects and intended to model the Magic Leap experience.

Magic Leap recently took over a portion of an old Motorola factory, at which it will build its first round of consumer and enterprise products. “We’re not in the research lab doing theoretical things,”Abovitz said at WSJD. “We’re gearing up to ship millions of things.”