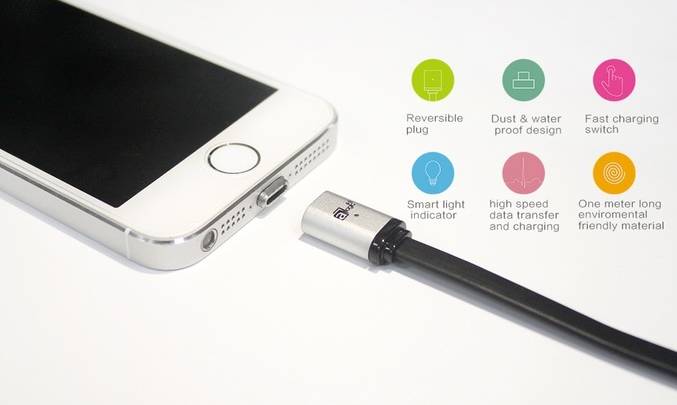 Even the most hardcore Apple hater can grudgingly admit that the MagSafe technology Apple uses to keep MacBooks charged is incredibly cool. Now a new Kickstarter project called MagCable that’s being spearheaded by a company called aMagic is hoping to bring this technology to your smartphone.

“We’ve all experienced the trouble of plugging or unplugging our smart devices while driving, in the dark, or when in a hurry,” aMagic writes on its Kickstarter page. “MagCable is a revolutionary magnetic USB cable which makes charging easy!”

Here’s how it works: The magnetic cable itself hooks up to a special attachment that’s designed specifically for your phone, whether it has a Lightning port of a micro USB port. The MagCable uses a neodymium magnet that aMagic says “provides magnetic power at a temperature as high as 200 degrees Celsius.” It also has a USB Type-C-style reversible plug and it has a fast charging mode that works by shutting down the cable’s data sync capabilities.

The project has already blown past its original funding goal of just under $77,000 and has raised over $136,000 as of this writing. The project says it will start shipping its first products next month, although there’s reason to be skeptical it will meet such a tight deadline.

As with all projects, be careful when pledging — we’ve seen lots of promising Kickstarter projects fail to deliver in the past and we’re particularly worried in this case about whether the MagCable will draw the attention of Apple’s intellectual property attorneys.