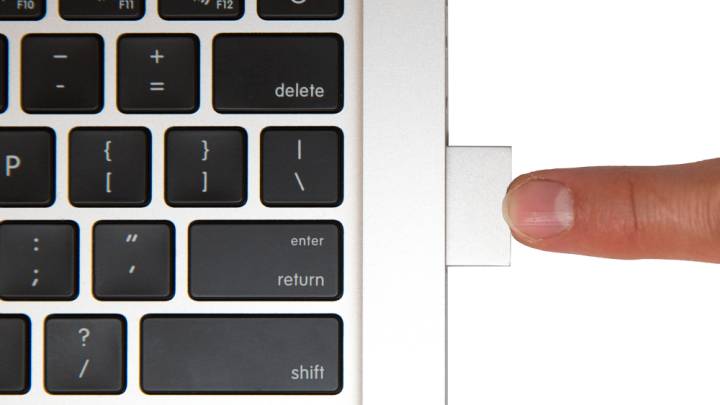 Apple has recently revealed it’s still selling a lot more MacBooks than expected and is continuing its positive growth in a PC business where sales are declining. But MacBooks aren’t cheap, and sometimes users end up choosing entry-level options that have limited storage.

Rather than purchasing pricier memory upgrades from Apple, you can always choose to upgrade the SSD drive in your laptop yourself, but that involves the hassles of actually opening up the laptop or paying someone to do it for you. Alternatively, you could buy an external hard drive, but you’d have to carry it with you at all times. And yes, there’s always the cloud with its unlimited resources, but that means you need a constant Internet connection.

But what if you could double your MacBook’s storage in less than three minutes with a push of a button and avoid any hassles related to alternative storage solutions?

That’s exactly what one company is proposing with a neat product that would fix your local storage needs without the hassles: The TarDisk Pear SD card. As you can see in the image above, once inserted in the appropriate SD slot, you’ll forget it’s even there, as it won’t stick out like other similar devices.

This isn’t your average SD card either, as it’s able to create a hybrid drive with the help of an OS X application that combines the local hard drive and your card into a single drive.

Once that’s done, the logically merged volume is managed by OS X. The internal SSD is used for the most frequently used files, with SSDs maintaining their original TRIM-enabled features and read/write speeds. Time Machine support is also available for the merged drive.

According to the company, which will sell the 128GB and 256GB disks starting Thursday for $149 and $256, respectively, performance tests with BlackMagic, GeekBench and NovaBench say that SSD performance is unaffected by merging it with TarDisk Pear storage.

The SD card should be compatible with a variety of drives though you’ll need an adapter if you plan on using it with the 12-inch Retina MacBook.