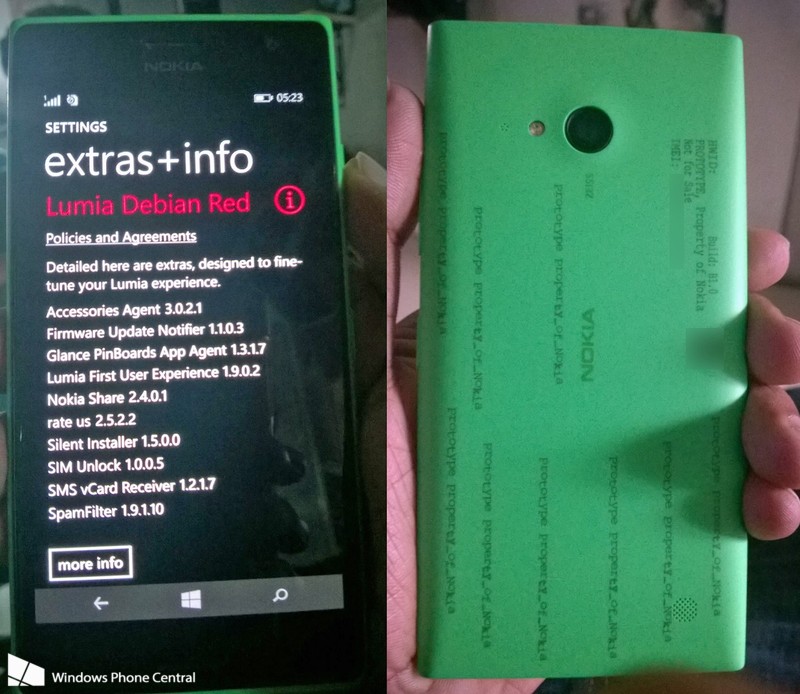 The release of the next Nokia devices might not be too far off. Windows Phone Central has obtained photos of what appears to be the Lumia 730, or the ‘selfie’ phone, which is reportedly going to be the follow-up to last year’s Lumia 720. It has been said that the standout feature of the new phone will be its 5-megapixel front-facing camera for taking some of the highest quality selfies on any Windows Phone device to date.

Apart from the camera, the Lumia 730 (codename: ‘Superman’) is expected to feature a 4.7-inch display as well, slightly larger than its predecessor’s. We can also see that Nokia has retained the bright green color of previous Lumia devices in its upcoming release.

The photos also reveal what could be the next firmware update for Lumia devices, codenamed “Debian Red.” We can’t glean anything else from the settings screen, but an update might be arriving alongside the next Nokia hardware releases.

This leak follows another from early last month in which we got a glimpse of the Lumia 830 (codename: ‘Tesla’), Nokia’s high-end yet affordable model which is purported to include a PureView camera. Both phones are expected to make an appearance in the next few months, as if the fall release schedule for new smartphones wasn’t crowded enough as it was.