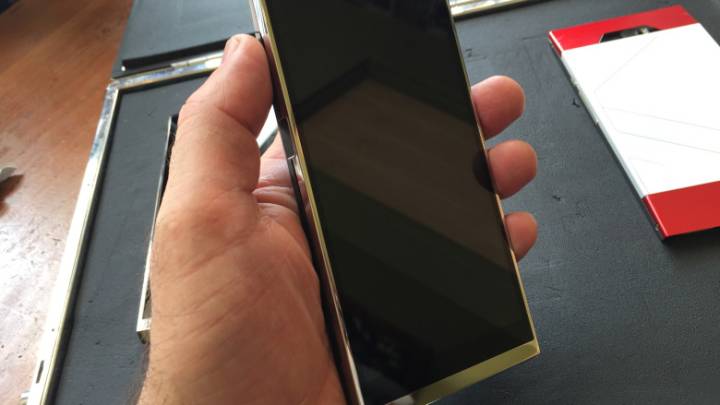 Apple has a long and, sadly, uneventful history with Liquidmetal. The promising and shockingly strong material has so far been used only in small iPhone components, but now it has finally made its way to a smartphone housing. Unfortunately for Apple fans, there’s still no sign of a Liquidmetal iPhone. Instead, an Android handset called the Turing Phone is set to become the first ever smartphone to sport a liquid metal case when it launches in the coming weeks.

Turing Robotics Industries has created the first “Liquidmorphium” phone the world has ever seen. The handset’s housing is stronger than aluminum, steel and even titanium, so “Bendgate” certainly won’t be an issue here. The liquid metal housing also features a great chrome look… on the front, at least. The back is a bit oddly designed, and it will likely only appeal to a narrow range of users.

Turing CEO S.Y.L. Chao told Venturebeat that his company is the first with the capability of manufacturing Liquidmorphium components that measure more than 10 millimeters. Until now, the largest liquid metal smartphone part has been the tiny SIM card tray in Apple’s iPhones.

Beyond the sturdy housing, the Turing Phone is also coated inside and out with a nanoparticle treatment that makes it waterproof. Even if water manages to enter the phone’s casing and cover the circuits contained within, the phone will emerge unscathed.

The Turing Phone becomes available for preorder on July 31st starting at $740 in the U.S. and China.