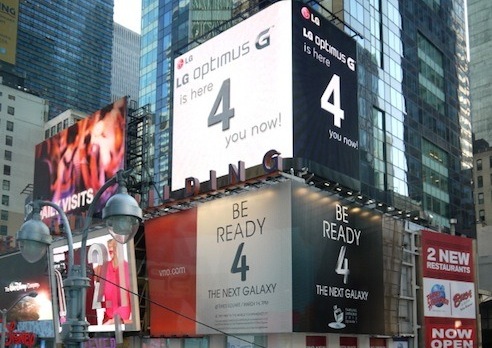 LG (066570) seems to have adopted the same clever guerilla marketing techniques that have served Samsung (005930) so well over the past year. Per Engadget, LG is trying to undermine Samsung’s grand Galaxy S IV launch by strategically placing its own larger billboards above the Galaxy S IV billboards that have sprung up all around Times Square in recent days. The LG billboards use the same enormous number “4” that Samsung has been using for its Galaxy S IV ads, except LG is telling consumers that “The LG Optimus G is here 4 you now!” As Samsung grows bigger, we can expect to see its rivals target it more frequently with these kinds of ads as they fight to end Samsung’s dominance of the Android market.