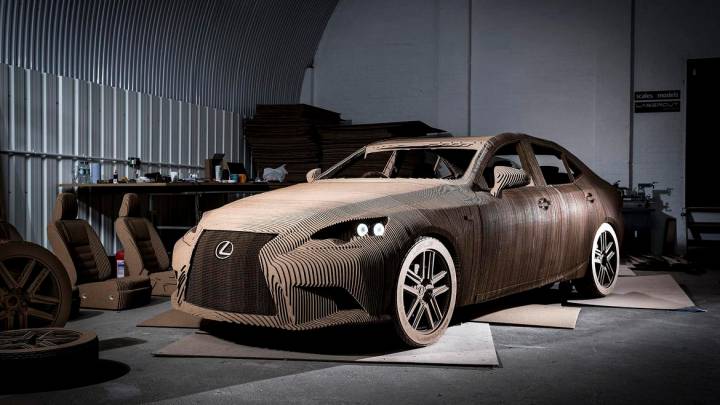 Lexus is back with one more incredible trick. After making a real hoverboard that can float above ground (assuming certain conditions are met), Lexus partnered up with a U.K. design firm to create a full car made of cardboard, one that you can actually drive around. Yes, even the wheels are made of recyclable cardboard.

Lexus U.K. and LaserCut Works combined their forces to create a Lexus IS version that’s made of cardboard, CNET reports. This Origami Car creation is built with the help of machines. Lexus provided the schematics for the car, and the design firm recreated the components for the car, which were laser cut to precision out of 10mm thick cardboard.

Actual human labor was used to glue all the individually shaped parts together. The 1-to-1 scale car needed 1,700 pieces of cardboard that were pieced together with wood glue. The cardboard sits atop of a steel and aluminum frame, and there’s an electric motor powering the car, which means you can drive it around (as seen in the clip below).

The entire project is extremely impressive. The wheels can roll, the doors open, the interior is complete just as you’d find it in a real Lexus IS, and the headlights can be turned on.

A video and an image gallery showing the cardboard Lexus IS follow below.