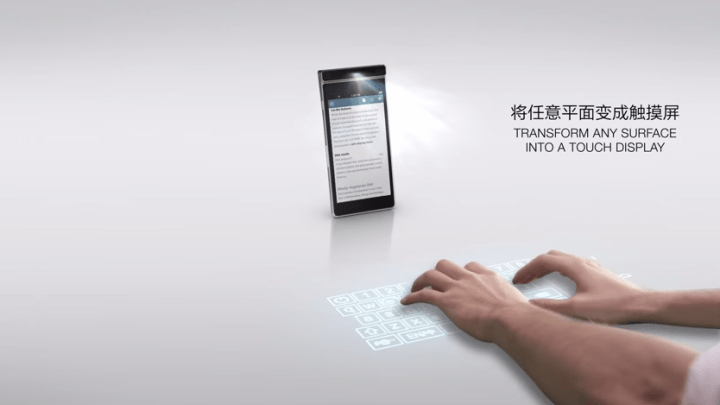 Remember back in 2012 when a local Fox affiliate thought some crazy iPhone 5 concept with a built-in laser keyboard and hologram projector was real? The video featuring that iPhone concept phone has since amassed more than 69 million views on YouTube, and it looks like at least a few of those views were Lenovo employees.

Lenovo on Thursday showed off a concept video detailing what it’s calling “Smart Cast.” The technology imagined in the video is identical to the “iPhone 5” we saw years ago in that infamous video — a built-in projector casts a keyboard or other controller onto any surface in front of the phone. Then cameras on the handset monitor the surface to watch for taps and swipes in order to add touch controls to any surface.

The biggest difference between that old concept video and Lenovo’s reimagining of it, of course, is that Lenovo wants to make this concept a reality.

Devices with similar technology have existed for quite some time. For example, this $120 gadget on Amazon uses lasers to project a working keyboard onto any table or desk. As far as when you can expect to see the first actual Lenovo phone with Smart Cast begin shipping, there’s no word on any actual release dates just yet.

If phones with Smart cast do launch though, and if it works reasonably well, it could definitely be a nifty way for Lenovo to differentiate its smartphones in an increasingly crowded market.

Lenovo’s demo video is embedded below.