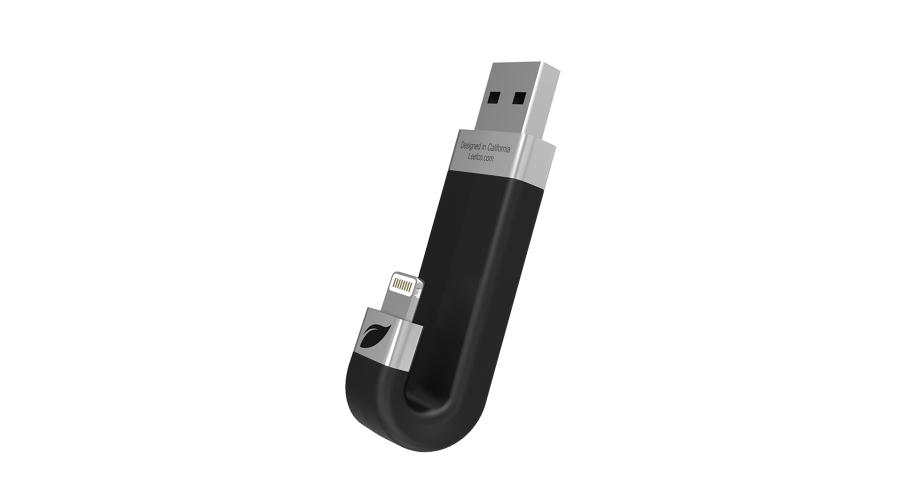 One of Apple’s problems with iOS devices, which became even more apparent after the launch of iOS 8, is limited storage available to the user for the most basic iPhone and iPad models, especially considering the increased amount of digital content users store on them.

In fact, Apple has been recently hit with a class-action suit that says Apple failed to properly inform users about the amount of storage iOS 8 requires, both for upgrading from iOS 7 on existing devices and on new devices. Luckily, users looking to ensure a smooth transition to future iOS 8.x updates — as well as the eventual release of iOS 9 — should consider a tiny storage dongle that was just released at CES 2015.

The Leef iBridge is a mobile storage option for iPhone and iPad users that will let them instantly transfer digital content, including pictures and videos recorded on an iPhone or iPad, and thus free precious storage space on the device.

The iBridge comes with dual Lightning and USB connectors that make transfers to computers an easier process, and has a companion Leef iBridge app for iOS that lets users transfer files and watch content directly from the stick.

A promo video for the iBridge and the full press release follow below.

While there are many external memory solutions available to people with Android smartphones or tablets, Apple enthusiasts have been seemingly overlooked Š until now.
Leef iBRIDGE plugs directly into compatible Apple devices with Lightning connectors and allows people to:
• Backup their Camera Roll automatically and quickly move photos off their phone
• Store your entire movie or music library externally to conserve internal memory and then stream media directly without having to worry about mobile data connection issues
• Capture photos directly to Leef iBRIDGE so you never miss life’s most memorable events when your iPhone runs out of memory
• Share photos, videos and other content with friends or between devices simply and quickly
In terms of style, design and capacity, Leef iBRIDGE is the ultimate user-friendly gadget, trouncing the few other bulky external memory solutions available to Apple users. Available in sizes ranging from 16GB to 256GB, it has a sleek, ergonomic ŒJ¹ shaped appearance and neatly curves round the back of a device rather than sticking out awkwardly. It plugs securely into your device without forcing the users to remove protective cases or hold their phone awkwardly.

Using mobile devices to capture memories through photo and video, listen to music and watch movies, or work while on the move is now away of life for many iOS mobile users. The dreaded ŒThere is not enough available storage¹ message has been the cause of frustration for Apple fans, but with Leef iBRIDGE, this no longer has to be the case.

³Leef iBRIDGE is compact, lightweight and complements iPhones, iPods and iPads as a standalone lifestyle accessory,² says Jonny Anderson, Partner and Director at Leef. ³It is ideal for those nervous about storing personal data in cloud applications. Leef iBRIDGE will be popular for Apple users who want to get more from their devices.²

Leef iBRIDGE is quick and conserves power too, with no need for an internal device battery. For example, backing-up 500 photos to your Leef iBRIDGE uses less than 1% of your iPhone battery life.

Leef iBRIDGE is available in 16GB, 32GB, 64GB, 128GB and 256GB capacities and pricing starts at approximately $59.99. It is available to purchase from the company website (leefco.com) and Amazon.comand will ship mid January.