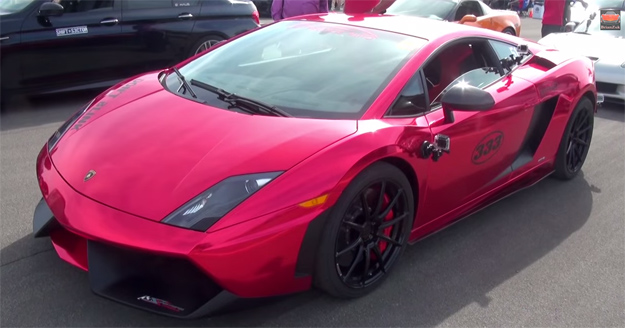 The Lamborghini Gallardo is obviously an incredible machine straight out of the factory, but the custom red Gallardo pictured above is in a league of its own. Built by Sarasota, Florida-based Heffner Performance, the twin turbocharged beast has been on display several times at shows, touting more than 2,000 horsepower thanks to a wide range of modifications.

Not everyone can handle all that power, however, and things recently took a turn for the worse when one driver crashed the one-of-a-kind Lambo into a pond.

DON’T MISS: Meet the movie pirating service that Netflix is afraid of

WannaGOFAST is an event that brings 125 race cars together 1/2-mile drag races. The event recently took place at a private track in Ocala, Florida, and unfortunately the talk of the event wasn’t which supercar bested all rivals.

According to the account of Jason Heffner, the Lamborghini’s driver ran over a patch of debris when he veered off course, sending the car sideways before darting across the track and into the small body of water.

“You can hear it spun a little in the first two gears. It spun in 3rd, spun in 4th,” Heffner told Road & Track. “At some point he went over to the left, in between lanes. In there you’ve got rocks and sand and debris that’s kind of blown to the side, and then you’ve got a car that makes over 2,000 horsepower to the tires, with rocks on the tires, the car just spun.”

Perhaps the most incredible part was that Heffner’s team had the car’s turbo turned down. “We had the boost down to minimum, about 17 pounds,” Heffner said. “That car would have no issue making 2,400 to 2,500 horsepower at the wheels at 40 or 45 pounds of boost.”

Thankfully, the driver emerged from the car unharmed after the crash.