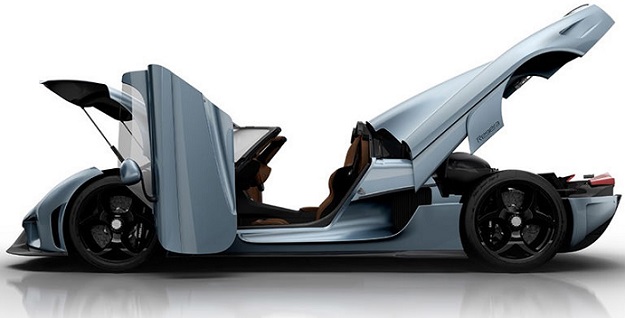 When it comes to automotive luxury, there are typically two ways to go. You can spend six figures and go with a standard luxury vehicle, a respectable group that includes heavy hitters like Tesla, the Mercedes S-Class, Porsche, and others. Or, you can drop a cool million, at a minimum, and step into the weird and endlessly fascinating world of multi-million dollar supercars where maintenance costs alone can sometimes top out at over $100,000 annually.

As a prime example, feast your eyes upon the Koenigsegg Regera, a limited edition (only 80 models will be built) hybrid supercar that costs approximately $2.34 million and was just unveiled at the Geneva Motor Show earlier this year. Designed by Christian von Koenigsegg, the Koenigsegg Regera can go from 0 to 62 mph in just 2.8 seconds and maxes out 255 mph.

But speed and an incredibly sleek design aren’t the only things the Regera has going for it. If you really wanna stand out amongst a crowd of exotic supercars, check out this video of the Regera, touted as the first fully robotized car, pulling off an impressive Transformers imitation. The company calls the robotized door system, which relies upon inbuilt hydraulics, ‘Autoskin’.

“Given the latest advances in compact lightweight hydraulics, Koenigsegg has managed to robotize the entire Regera with almost no weight addition,” the company boasts on its website. “As the Regera features functions such as; active front and rear wings, chassis control and lifting system – the pumps and accumulators were already in place to connect a few more hydraulic operators. These in turn replaced gas struts of equal weight – resulting in minimal weight impact.

“Due to the above, the Regera is the first car in the world that operates all body closures completely automatically. The spectacle to open and close the entire car simultaneously from the remote or smartphone, truly turns the Regera into a transformer.”

As far as hybrid cars go, I think it’s fair to say that this design takes the cake.

Koenigsegg’s full description of what makes the Regera so unique reads as follows:

The Regera was created as a luxury Megacar alternative to Koenigsegg’s traditional extreme, light weight, race-like road cars. Even though the One:1 and the Agera RS have surprising levels of practicality, creature comforts and features, their primary focus is, and has always been, to be the overall fastest cars on the planet – around a racetrack or anywhere else.

Regera is Swedish for “to Reign” – a suitable name for a machine that offers a never seen before combination of power, responsiveness and luxury – a true Dr. Jekyll & Mr. Hyde persona.

In spite of all its advanced technology and creature comforts, the Regera is comparatively light. Therefore, it can still perform competitively around a race circuit. The only Hyper/Megacar that we think could possibly be faster around a circuit is another Koenigsegg.

The Regera will reign as the king of the open road – as the fastest accelerating, most powerful production car ever.

The Regera will be handcrafted in only 80 examples. Apart from being a suitable production run for Koenigsegg´s newly upgraded and refurbished production facility, the number 80 also symbolizes the principle of domination, control and achievement in Pythagorean Numerology.”

Impressive. Now there’s just that $2.34 million price-tag to deal with.