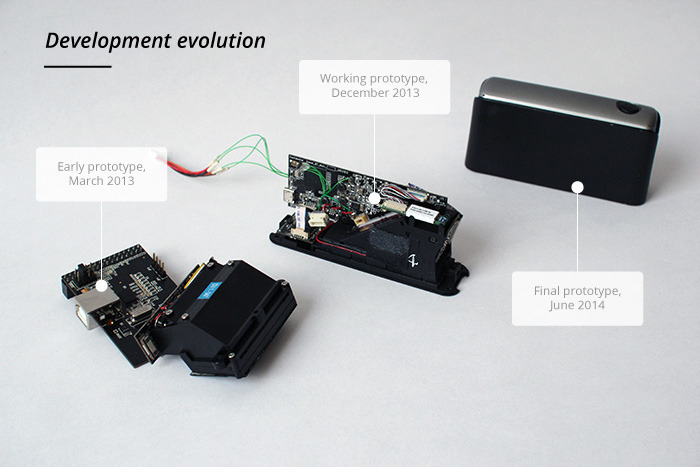 Scanning documents and photos isn’t such a chore anymore, as mobile devices can now be turned into a portable scanners instantly with the help of a simple application. But people who want more from their scanners, and who happen to scan a lot of things on the go, should check out PocketScan, a new Kickstarter project that has already blown past its funding target.

PocketScan is a tiny portable scanner that connects wirelessly to other devices including tablets and computers (Windows and OS X), and – best of all – comes with advanced character recognition and support for up to 130 languages, so it can help users turn scanned documents and charts into editable documents. The scanner also offers users an instant preview of the documents or pictures they scan, allowing them to make sure they capture the information they’re interested in.

The cheapest PocketScan costs $99 on Kickstarter, $50 less than the anticipated price, and will ship in December. With 26 days to go, the Swiss company Dacuda has already raised more than $150,000 from almost 1300 backers, or three times the initial goal, so it’s likely that PocketScan will head to production.

The full press release and a video showing PocketScan in action follow below.

PocketScan provides a user-friendly experience that enables users to scan any format up to A2 fit, scanning items that don’t fit into a regular scanner. By simply moving PocketScan across a document, the content is assembled in real-time and transformed into editable text, tables or images. Tables are transformed into Excel-Sheets and Documents can be edited right away in the typical Word format. Additionally the scanner’s clever design works in any light condition and produces high quality images that are clear, consistent and bright.

“We wanted to create a scanner that outperforms the traditional scanner,” said Alexander Ilic Founder and CTO of Dacuda. “The scanner is compatible with popular software, produces consistently clear images and will simply scan items that a regular scanner is unable to scan.”

The small, portable device is also the perfect on the go companion that wirelessly connects with the devices you love. It seamlessly connects to via Bluetooth/iBeacon to any PCs Mac or iPads. It instantly recognizes text in over 130 different languages and works great with Evernote or Microsoft’s Office suite. All text recognition runs locally on the device, which is great in countries with poor Internet connectivity.

Whether the scanner is used for professional or personal use, in the office or on vacation, the tool provides users with their choice of creative or functional use. Some example use cases include:

· Home & Family: Scan old photos into high quality from photo albums, create cooking books with your personalized recipes and preserve your kids old letters or drawings.
· Design & Creativity: Use PocketScan to scan and compare colors and patterns. Scan pictures or texts and PocketScan can help you recognize fonts and find the original high-resolution images.
· Business & Collaboration: Scan and edit any text and table, archive receipts and collaborate in real-time during face-to-face meetings or videoconferences.
· Travel & Mobility: PocketScan is small enough to take anywhere and is able to connect to all of your devices. PocketScan can also translate foreign languages.
· Education & Learning: Scan content instead of carrying around heavy books. For research, you can use PocketScan to find original sources of scanned texts and properly cite. PocketScan also helps you edit data and organize it to your needs.

The trademark of the scanner is portability. It’s small enough to take anywhere, but also has the computability to be used with existing devices. With so many different functionalities, the scanner can be used anywhere for virtually anything.

With its headquarters in Switzerland and offices in Asia, Europe and the United States, the company has grown into an innovation leader in scanning technology. Having introduced the world’s first scanner mouse and other products Dacuda’s technology is in use by over 1 million users in over 140 countries today.

With their Kickstarter launch of the PocketScan Dacuda is taking the next big step making scanning entirely mobile and introducing the world’s smallest wireless scanner.