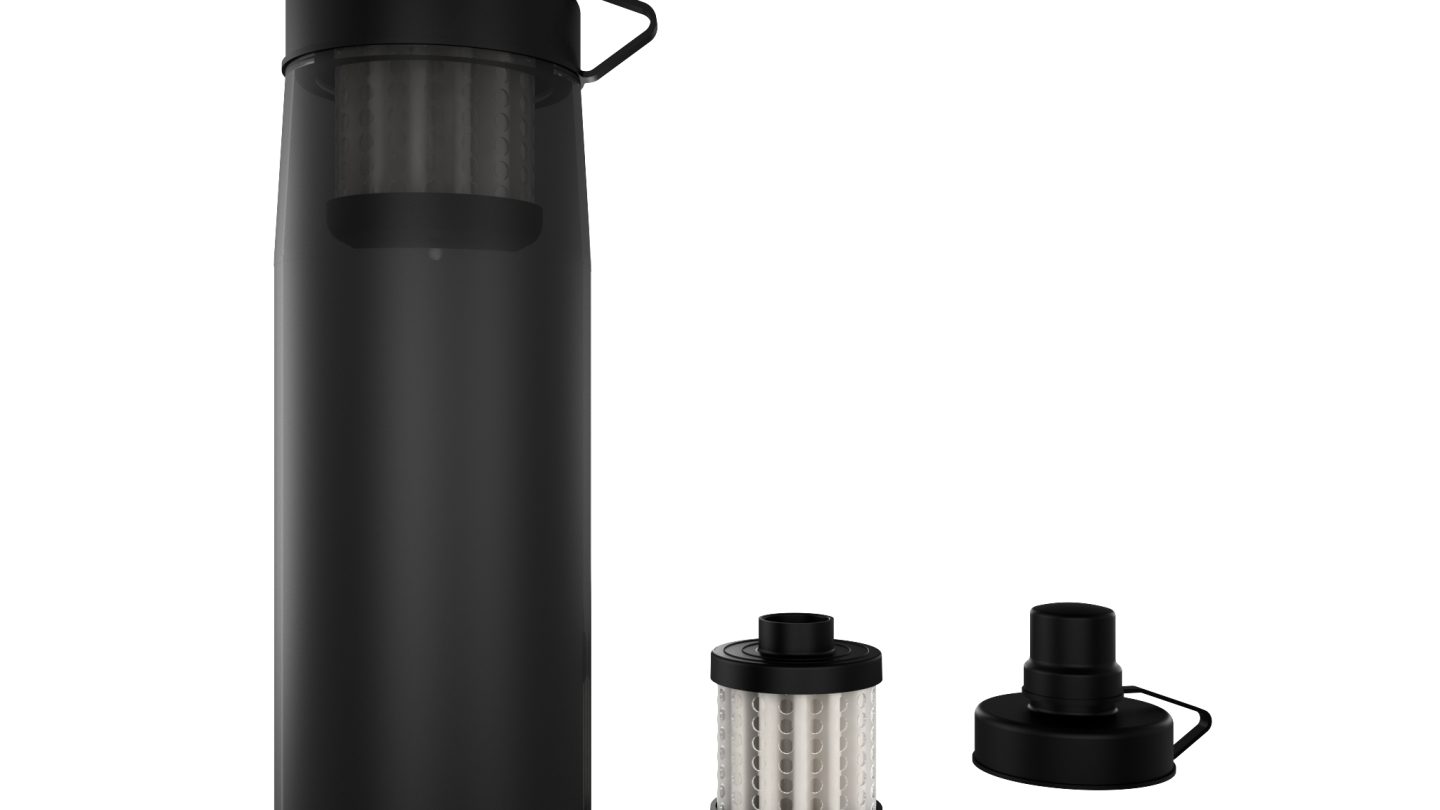 After unveiling its clean water vision a few days ago by announcing a new filter capable of cleaning 99.99999% of germs and bacteria usually found in water as you drink it from a special bottle, Liquidity is going forward with its Kickstarter campaign. The company on Tuesday kicked off its crowdfunding project, looking to raise at least $40,000 in the following 30 days to make Naked Filter a real product.

That means the Naked Filter bottle is now available for preorder via Kickstarter, with the cheapest price being $10 for one bottle and one filter. This perk does come with some small strings attached, though: you’ll have to post a picture of yourself using Naked Filter on Instagram and respond to a brief user survey once you get the bottle and filter package this August, but that sounds more than reasonable for getting the chance to use this potentially revolutionary water product before anyone else.

The Naked Filter will cost $23.99 for one bottle and one filter once it becomes available in stores, with each filter good for up to 30 gallons of use (or up to 115 liters). Each bottle can hold as much as 24 ounces of liquid, with the bottle cap and filter being compatible with other sports bottles as well.

Naked Filter should head to retail in the U.S. in the third quarter of the year, with distribution to other countries set to start at a later date.

Videos further explaining the inspiring technology behind Naked Filter and the full press release follow below, with the Kickstarter preorder page available at this link.

The goal of Naked Filter’s Kickstarter campaign is to test consumer interest and support key remaining steps needed to launch the product. By helping the campaign, individuals will assist Liquidity in achieving its vision of distributing water purification products globally, with the goal of making a serious impact on waterborne illnesses – a major global health issue. Funds raised from supporters will be used to finance the manufacturing and distribution of the new product.

Shipments of Naked Filter will begin in August. However, the first Kickstarter supporters can receive early-bird access to the product in July, before the product is available to the general public later this fall. Naked Filter’s initial backers can take advantage of a range of early-bird rewards at various funding levels, including:
· Naked Evangelist: For those who want special access to the first-off-the-line commercial batch of 500, backers can get one bottle and three filters for $50. Product ships in July.
· Naked Pioneer: A limited batch of a few hundred units that offer one bottle and one filter for $10 plus some social love. Product ships in August.
· Naked Family: Limited quantities of four bottles and eight filters for $70 initially. Ships in August.

Naked Filter’s Kickstarter campaign starts today and will run through Earth Day, ending at 11:59 p.m. PDT on April 22, 2015. The campaign has a fundraising threshold of $40,000.

The revolutionary nanotechnology that powers Naked Filter is a result of more than 15 years of R&D at Stony Brook University and Liquidity. This portable water filtration bottle is Liquidity’s first mainstream consumer product, and the first product to offer an electro-spun, nano-fiber membrane technology that provides high-quality bacterial filtration at flow rates not possible in the past. This breakthrough enables incredibly user-friendly products that provide drinking water at the standards set by the EPA for bacteria and cyst removal.

As Victor W. Hwang, CEO of Liquidity, states, “This is the world’s first personal water purifier that is effective and convenient enough for daily use by ordinary people. Take it anywhere, fill it up, and drink healthy water anytime on-the-go.”

Naked Filter takes bacteria-laden water and removes 99.9999% of the microorganisms to create, water that is naked: free of bacteria, free of added chemicals, free of odor, and free of hassle. Using Naked Filter, people can fill the bottle with tap water or scoop up fresh water right out of a stream, and drink straightaway. Fresh water can come from anywhere: a creek, a pond, a faucet when traveling, a public drinking fountain, or much worse. Naked Filter acts like a colander, physically removing disease-causing bacteria such as E. coli, Salmonella, and Cholera, plus protozoan cysts such as Giardia, as the water flows through it.

Benefits of Naked Filter
Naked Filter has several innovative features:
· Highly Effective – Fewer than 1 in a million bacteria pass through. It also greatly improves the taste and odor of water.
· Highly Convenient – Drink it normally, like you would a standard water bottle. No hard pressure is required.
· Safe-throughout-life – Naked Filter is good to the last drop. It’s equally effective the last time you use it, as it is the first time you use it. Once Naked Filter reaches its capacity, the filter blocks up and water stops flowing, alerting users that it’s time to replace the filter, delivering true peace-of-mind about the water quality. This performance distinguishes Naked Filter from some other portable water bottle filters.
· Ergonomic – Fits everywhere you’d want to take and use it, including your car’s cup-holder, fanny pack, bike water bottle cage, backpack, treadmill, tote bag, and man purse.
· Interchangeable – Naked Filter is compatible with some other sports water bottles. Its cap with the revolutionary filter can easily be swapped onto some other water bottles.
· Made in the U.S.A. – Naked Filter is made entirely in the U.S., enabling the highest level of quality control.
· Meets or exceeds EPA standards – Naked Filter’s removal level meets the U.S.
EPA’s (Environmental Protection Agency) standards for bacteria removal and exceeds by 1000X the standards for U.S. EPA and NSF 53 cyst reduction.
· BPA-free – Naked Filter is BPA-free.

Pricing and Availability
Naked Filter, which is comprised of 1 bottle and 1 filter, is slated to retail for $23.99 and begins shipping to the general public in the U.S. in the third quarter of this year, with distribution to other countries soon thereafter. Naked Filter will be available initially with a matte black cap and semi-transparent black bottle. Other colors may be available later. Each water bottle will hold 24 ounces of liquid.

About Liquidity
Liquidity is a Silicon Valley startup manufacturing breakthrough water purification products based on revolutionary membrane technology. For several years, the company has been developing a portfolio of breakthrough technologies for purifying water, including Liquidity’s electro-spun, bacteria-retentive nano-fiber membrane. The company’s investors include GSR Ventures, Capricorn Investment Group, and T2 Venture Creation. Liquidity is based in Alameda, CA.