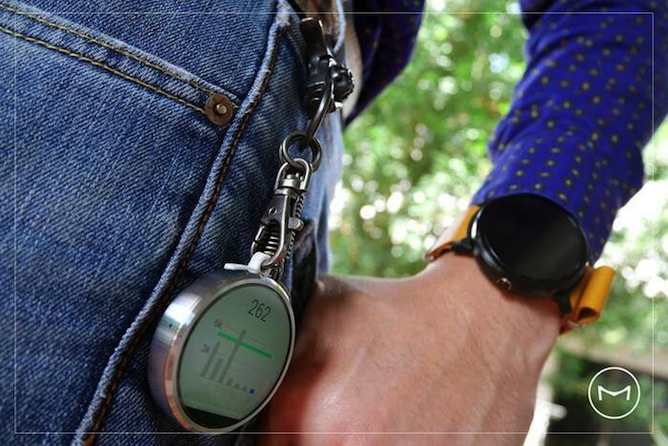 For some smartwatch buyers, the circular Moto 360 is the best-looking wearable device out there, and the Motorola gadget is definitely popular with buyers — at least when compared to other Android Wear devices. To make it even more appealing, SteelConnect has created some interesting accessories that are currently available for purchase on Kickstarter, including a hook that can turn the Moto 360 into a smart modern pocket watch, as seen in the image above.

The first two are both stainless steel strap adaptors that are supposed to reduce wear and tear of the pin holes and reduce cracked back issues. The M ° 1 8 0, M ° 2 2 5 cost £15 and £33, respectively.

The Hook is the more interesting accessory, as it lets users turn the Moto 360 into a pocket watch. The Hook can be used to make a Moto 360 necklace as well, for anyone interested in wearing the gadget in that way.

SteelConnect M products will start shipping at some point in January next year, as the company has already passed its £10,000 funding goal on Kickstarter with a week to spare.

A video showing these special Moto 360 accessories follows below.