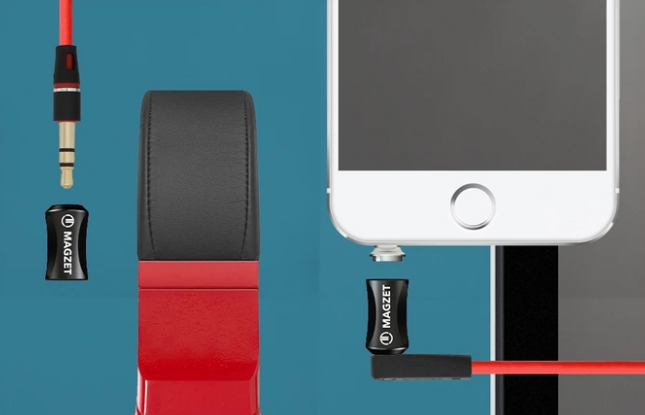 Apple’s proprietary MagSafe charging technology, used in all MacBooks except for the brand new 12-inch Retina MacBook, has prevented countless accidents from damaging Apple laptops. And if you like Apple’s MagSafe cables, then you should definitely check out Magzet, which uses the same kind of magnet-based tech to protect mobile devices against similar accidents that can occur when your headphones get ripped out of your smartphone.

Magzet is currently looking to raise no less than $294,000 on Kickstarter, an ambitious goal for the cool device. It has 38 days left in the campaign and so far, the project has convinced more than 400 backers to pledge almost $20,000 for it.

The Magzet is actually made of two different elements: The so-called “Magkap” is the side where you plug your headphones in and the “Magjack” is the side that should permanently stay in gadgets that have headphone jacks. The Magkap and Magjack snap into place with help of magnets and can easily decouple in case the Magkap is forcefully pulled.

Ideally, one would have multiple Magjacks placed into various devices, including smartphones, computers, and other gadgets, and at least one Magkap for plugging in the headphones. Moving the headphones from one device to the next would be an easy process, as the user wouldn’t have to remember to bring the Magjack along to ensure MagSafe-style accident protection is available.

However, the Magjack end isn’t the best-looking accessory you’d want to permanently have plugged into some devices, such as slim iPhone and/or Android smartphones.

The Magzet, further described in the following video, should ship at some point in December, assuming the campaign is fully funded. Oh, and that’s also assuming that Apple’s legal team doesn’t catch wind of the project and sue them into oblivion.

The cheapest Magzet kit costs $35 on Kickstarter and it offers users one Magkap and two Magjacks.