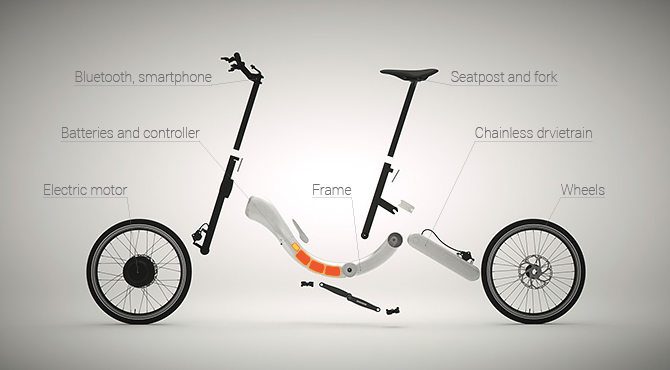 Cycling fans searching for 21st century bike should look no further than JIVR, an interesting project currently seeking funding on Kickstarter. The JIVR team has reimagined the bike and has adapted it for the future by including several features into its design including an electric motor and battery, a folding mechanism and smart internal components that let you connect it to a smartphone, smartwatch and other devices.

The JIVR weighs just 33lbs (15kg), making it highly portable when folded. The electric motor can deliver speeds of up to 20mph (32km/h), a 20-mile (30km) range, with the battery charging in just 90 minutes.

The iBeacon technology lets the JIVR connect to a variety of modern devices, letting users both obtain useful information about their cycling sessions.

The downside of this interesting electric bike is its price. The JIVR is not exactly affordable, as it’s quite pricey at £2,000 ($3,000). Even some of the cheaper Kickstarter tiers, which include membership in the JIVR Ambassador project, are still rather expensive (starting at £699 or $1,046), and come with certain strings attached such as having to ride the bike in a city that has at least 1 million inhabitants.

Even so, the company has already raised almost £42,000 out of the £70,000 it’s seeking and has 20 days left to go until the campaign closes. Assuming the JIVR project is fully funded, the company promises to begin shipping units to backers starting with September.

Videos explaining and demoing the JIVR follow below, with more details about the Ambassador project available on Kickstarter.