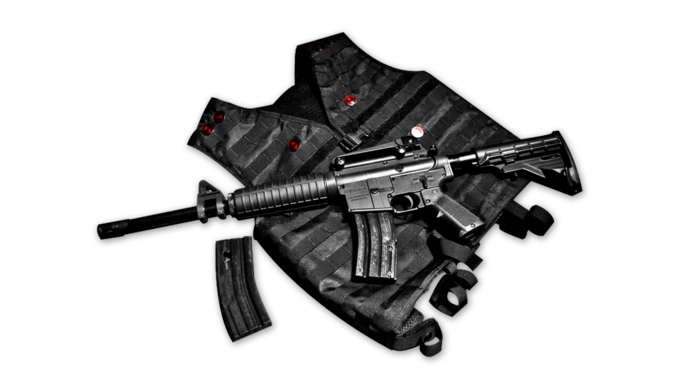 Those gamers who no longer find first-person shooters amusing enough should check out a new Kickstarter  project that wants to offer players a “real-life in-person combat shooter and horror survival experience.” In other words, players get real weapons and combat gear, and experience real combat and pain. Blood, Guts ‘n Glory (BGnG) is an event that will take place in Atlanta Georgia this October, assuming the project is fully funded. The project places teams of players into realistic combat scenarios where they’ll have to fight zombies and mutants or battle insurgents and other special forces.

The players will be equipped with a main tactical IR-based M4 variation, that will have the same size, shape, weight, recoil, realistic sound, changeable magazines and muzzle flash as the actual rifle, and a secondary IR Glock 17 replica with characteristics to the real gun.

Moreover, they’ll also be equipped with a PAIN belt (Penalty Action Includes Nerve Stimulation) that will deliver adjustable electric shocks when shot by the other team or attacked by zombies.

The company plans to partner with two other firms that are currently working with the “Walking Dead” series to provide art, set design and all the other special effects needed to create a realistic combat experience.

Available pledges from BGnG range from $10 to $3,500, but interested players will have to pay at least $125 to get 2 tickets, 1 primary weapon and 1 secondary weapon. Travelling to Atlanta is, obviously, not included. The following videos reveal more details about the BGnG game idea, and about the PAIN feedback belt.