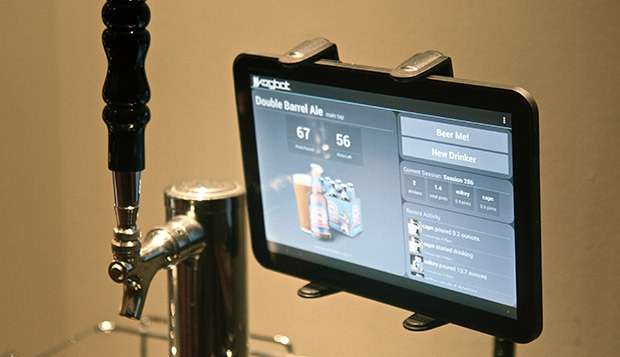 Beer aficionados who also share a passion for Android mobile devices may be interested in backing a Kickstarter project that aims to leverage the power of mobile devices to improve home cool beer drinking experiences. The Kegbot is a tablet-powered beer Kegerator that will keep track of how much beer is left in your keg to help you make sure that you’re never in danger of running out during a party.

The Kegbot is a combination between Arduino, Android, and beer (obviously!) that will help users keep accurate track of beer consumption. What’s more, Kegbot has a web interface that allows users to view and manage all their taps online, if that’s a feature they want to take advantage of.

In order for everything to work, users will need a plug-and-play Kegbot controller board (the Kegboard Pro Mini) that can be connected both to a flow sensor on the keg and to an Android tablet that runs a special app.

Interested backers can pay anywhere from $1 to $699 to support the project, with $149 being enough for a starter kit that includes the Flow Meter, the beer line connectors and the Kegboard Pro Mini. The software for the Kegboard is available for free.

With five days to reach its $15,000 funding goal, the project has actually surpassed $35,000 in pledges and the first products are expected to ship in March. An iOS version of this cool beer project may be available at some point down the road.

The following video reveals more details about the Kegbot.