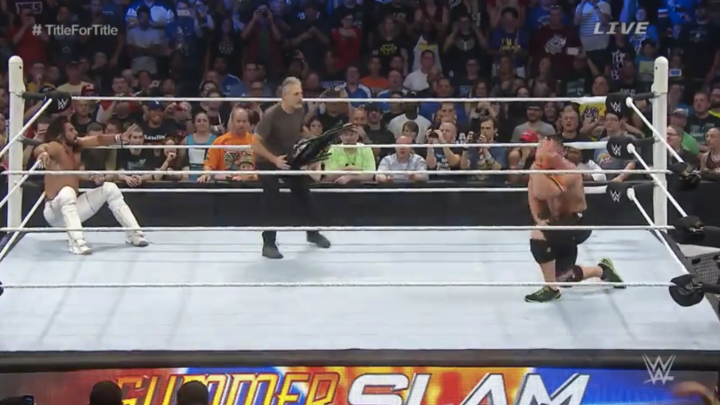 Unless you’re really into professional wrestling, you might have missed Jon Stewart hosting WWE SummerSlam over the weekend. Stewart is a self-proclaimed wrestling fan, so it wasn’t a complete shock, but it’s crazy to think that this is the comedian’s first gig since retiring from The Daily Show earlier this month.

His hosting duties were announced a while ago, but no one was sure whether or not he’d get back in the ring after his infamous entanglement with Seth Rollins during a previous match. But to the glee of everyone in attendance at SummerSlam, Stewart climbed into the ring to save Seth Rollins before John Cena finished him off.

Donning a magnificent gray beard, Stewart sprinting in as both wrestlers were writhing in pain on their backs. He was armed with a folding chair, and it looked like he was going to take revenge on Rollins for disrespecting him on his own show. Then Stewart changed his mind, rushed Cena and slammed the chair into his abdomen before swiftly departing.

It’s truly a sight to behold, and an amazing first public appearance following nearly two decades as the host of a political talk show. You can watch the encounter below: